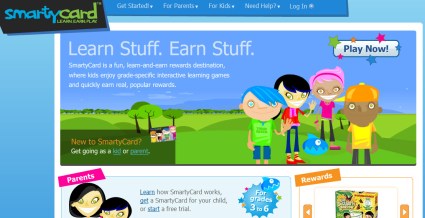 SmartyCard has a smart way to get kids to learn via its reward-based quizzing approach. The company, which is showing off the service at DEMO today, runs a web site where kids can take quizzes to earn prizes that have been paid for by their parents.

It’s sort of like the carrot approach, getting kids to eat their veggies before enjoying dessert. The San Mateo, Calif.-based company sets up a bunch of multiple-choice quizzes — ranging in difficulty from easy to medium to hard. Each time kids score seven correct answers out of 10, they earn points. Those points can be used for prizes.

The prizes include all sorts of cool stuff, from iTunes music cards to video games. They’re paid for in advance by parents, who buy a certain amount of points-worth of prizes with real money. Quizzes can include such topics as “multiply,” “plants and animals,” “USA,” and economics.

A kid playing for an hour might earn 4,000 points, and prizes might be worth 25,000 points. Parents can look at the kids’ progress and see what they both learned and redeemed. Parents pay about $10 for 5,000 points. But the company is also preparing to launch currency cards at retail in the coming months, so kids can actually buy points with their own money. SmartyCard makes money in a kind of rewards arbitrage. It buys the rewards in bulk from various goods makers. Then it turns around and prices those rewards at a slight premium.

The kids play with cartoon-style characters, aimed at kids in grades three to six. The company has 50 employees and is funded by Hearst Corp., Oak Ventures and Founders Fund. Its chief executive is Rob Hutter, former partner at Revolution Ventures. The company was founded in 2008. An indirect rival is HandiPoints and another is uBoost.