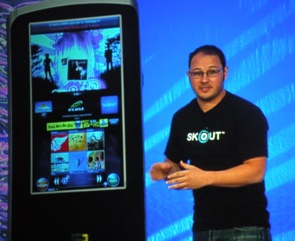 We’ve already written about Skout, a location-based dating application that recently came to the iPhone — but today at the DEMO conference in Palm Springs, it just announced a big addition to its service. That addition is the Skout Out, a kiosk of sorts for location-based dating that features a jukebox and a 42-inch plasma screen.

It’s one of the more out-there concepts I’ve seen at DEMO, and I mean that in a good way. At first, it seems silly to add a giant device to a service whose big advantage is mobility — and that silliness is underlined by the fact that Skout Out kind of looks like a giant mobile phone — but after hearing the pitch, I think it could actually function as way to “anchor” Skout in a physical location, as the company claims. Not only can you perform the basic Skout functions, such as finding nearby single folks and sending a flirtatious message to their phone, but you can also buy them a drink or play them a song on the jukebox.

The concept is fun enough that people would enjoy trying it out — at least judging from all the snickering conversations about Skout Out that I’ve heard today — but it also allows for a more traditional business model. The service isn’t just based on virtual goods and advertising, but also involves buying real products and forking over real cash to play music, just like a normal jukebox.

Of course, as with any social service, the real issue is adoption — but chief executive Christian Wiklund and Business Development Vice President Redg Snodgrass say the Skout Out will “soon” be in 10,000 locations. The San Francisco company has raised around $1 million in two rounds of angel funding.

http://vimeo.com/moogaloop.swf?clip_id=3435206&server=vimeo.com&show_title=1&show_byline=1&show_portrait=0&color=&fullscreen=1
Skout OUT from TechCrunch’s Robin Wauters on Vimeo.