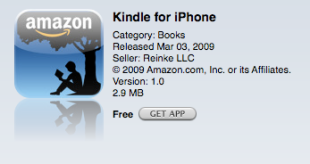 My main criticism of the Kindle, Amazon’s eBook reading device, wasn’t that there was something wrong with the device, it was that in a world of smartphones, I couldn’t see many people paying $359 for a device that just reads books. And Amazon, which is first and foremost a book selling company, had to realize that the cost of the device, as good as it may be, would limit the sales potential for eBooks. Now I think it clearly does realize that, as it’s just launched Kindle for iPhone.

The application, available for free in the App Store, gives you access to all the eBooks you can find in the Kindle store. It’s not perfect — you need to buy the books on the web for example, and then they get transferred over to your Kindle app — but it’s a damn good idea.

Electronic book apps have been the fastest growing category recently in the App Store, according to a report by O’Reilly Radar. Applications like Stanza, an eBook reader, have proven popular on the iPhone so far, despite complaints by many that the screen is too small to read a book on. Now Amazon brings the Kindle store’s mother-lode of content to the device.

If you’re new to reading eBooks on the iPhone and worry about the small screen, you can get free samples of books to test the experience out. It’s certainly not as nice as the experience you get reading on the Kindle device, but for a lot of people, it sure beats paying $359 — and perhaps worse, having to lug around yet another piece of electronics. 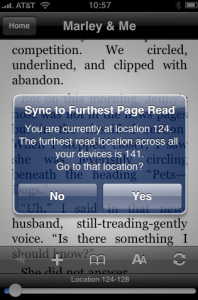 The app has other benefits, such as syncing your current location in a book with Amazon’s servers. This feature (called Whispersync) is also available on the Kindle device, and it makes a lot of sense if you start reading a book on one, but want to continue on another. You can also adjust font size on the Kindle app, just as you can on the Kindle itself, and view notes that you took on the Kindle.

Since you buy the books through Amazon’s actual website, they are priced the same as they are on the Kindle — most running $9.99.

At the launch of the Kindle 2 last month, Amazon chief executive Jeff Bezos hinted that the Kindle experience would come to other devices eventually. Speculation had been that the iPhone might see an app, but I don’t think anyone expected it this soon.