ZillionTV, yet another company serving on-demand internet video to television sets, has unveiled its set-top box to a largely unenthused audience. With Apple TV, Roku, Vudu, 2Wire, Boxee and more already battling it out, it seems doubtful that a player so late to the game will survive. But ZillionTV is taking a different tack that could either help it cut through the competition — or completely tank. 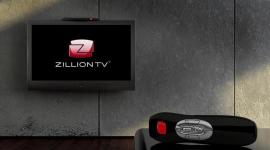 Considering that it’s led by Mitch Berman, veteran executive of HBO, the E! Network, and on-demand service Arris, it might be on to something. The biggest difference is that ZillionTV claims to target advertising very precisely to its viewers — raising engagement and ultimately squeezing more dollars out of advertisers. It does this by combining data on individual user viewing habits with market and demographic data from other sources. The interface also questions users on the types of products they wouldn’t mind seeing ads about. As is, ZillionTV will require users to watch the commercials it serves, or pay a small fee for uninterrupted content. It says that it will show half as many ads as broadcast television channels, but more than most internet video players like Hulu. This seems like a risky move for a product that will need to attract customers used to DVRs and ad-free systems. But ZillionTV argues that its advertising will be so relevant (and sometimes even interactive) that users may actually like it.

The other major point of contention is the breadth of content it will provide. With NBC and Fox focusing on Hulu, they have incentive to withhold new programming from Zillion. And other internet video providers, especially premium cable networks, have been nervous to stream their shows for fear of losing subscribers. It’s critical that ZillionTV nab all of the best current and past programming just to stay afloat in this already crowded environment, and there’s still some question whether it will be able to pull it off. It says it expects to offer 15,000 shows and movies in its first year — but that’s pretty much par for the course.

There are a couple other goodies ZillionTV is throwing in to counter skeptics. At less than $100, the box is much cheaper than most of its peers. The company initially wanted to offer it for free — even though it costs a little over $100 to make, according to the New York Times. It’s that confident in its advertising strategy. It also comes with a remote control that other models lack for ease of navigation, and sports an intuitive interface that has already won praise from reviewers. And, like 2Wire, it’s service will be distributed by internet service providers, bundled with their regular broadband coverage.

ZillionTV has some other marketing schemes in the works as well. Soon, its users may be able to buy products they see during programs through its interface, and earn reward points for discounts. It also plans to offer older films supported by ads may also give Netflix’s new streaming subscription service a run for its money. And it has a few other deals with studios in the hopper to continue expanding its content once it hits the market.

The company is asking prospective users to sign up on its web site for updates on the product’s rollout, slated for later this year. Based in Sunnyvale, Calif., ZillionTV has raised about $18 million in capital to date from Sierra Ventures and Concept Ventures. Other backers include credit card company Visa, chip maker Sigma Designs, Disney, 20th Century Fox, NBC Universal, Sony and Warner Bros.