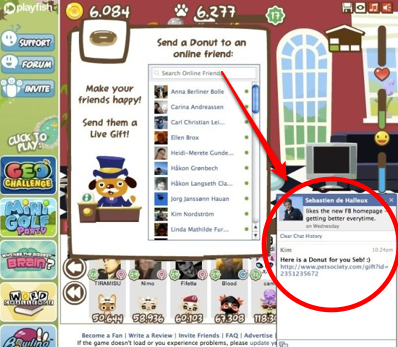 Facebook has taken another step towards promoting its increasingly popular instant message “Chat” service — in this case, within third-party applications. While third-party IM services like Meebo have been running within Facebook apps for many months, Chat now promises “significant growth as users invite their friends to join them in real-time,” according to Facebook. Let’s say you’re playing a gaming app, as the sample screenshot shows. You can see which Facebook friends are online and available to chat from within it, then invite them to chat without leaving. Friends receive the invite through their chat window, potentially convincing them to come and play. Developers can filter which types of friends can appear within their applications.

Application invites normally go to Facebook friends within the site’s requests inbox. Think about how much harder it is to ignore a friend’s instant message than a friend’s email and you can see how this might spur application usage, especially considering how popular Chat seems to be. A Facebook engineer has previously said that more than 2/3rds of the site’s 175 million-some users have used Chat at some point.

Facebook is also rolling out its chat service to other web services, including Meebo’s service for aggregating IM services from other companies like AOL and Google. Assuming Facebook Chat becomes more closely tied to its web-wide social data-sharing service, Connect, you can imagine this service become even more valuable down the road. Right now, VentureBeat staffers could create an app that contains a discussion board to talk about articles we’re publishing, then we could invite our friends on Facebook to discuss it with us in real-time. Of course, Facebook is also trying to make its fan pages more interactive — so maybe we could invite fans of our VentureBeat Facebook page to Chat, as well. Perhaps one day, we could use this Chat invite feature to get these users chatting on a message board on the VentureBeat site, through Connect. That would could be an especially valuable way for us — or any site with a community, that wants to reach that community — to take advantage of this sort of feature.