Jive Software is announcing the latest release of its collaborative “social” software for businesses. The Portland, Ore. company says version 3.0 of its application package, now called Social Business Software, marks the first time someone can combine internal and external collaboration (i.e., collaboration with the rest of the company and collaboration with partners and customers) by managing them in a single environment.

A year or two ago, there seemed to be a glut of companies offering social networking for businesses. With the downturn, you might assume that Jive was part of a fad that has passed, especially since it was one of the first companies to follow its investor Sequoia Capital’s advice by eliminating 36 jobs, including executives. But after talking to Chief Marketing Officer Sam Lawrence, it sounds like that would be a mistake — Jive added 200 customers last year, bringing its total to more than 2,500, and many of those newer customers are paying for more expensive tools, so its revenue actually grew 70 percent. In fact, Lawrence says Jive is hiring. And a recent report from Forrester identified Jive and Telligent as the leaders in the “community platforms” market.

In addition to rolling out new features, Jive has gotten rid of the confusing Clearspace and Clearspace Community names for its products; now it’s all just Social Business Software. The services that were included in Clearspace — such as shared documents, blogs, project management, and customers comments — are now part of Foundation, the core SBS product. SBS also allows companies to create “centers” for centralized collaboration around the product’s four main uses: employee engagement, marketing and sales, innovation, and support. Then companies can buy modules to enhance the basic offerings. 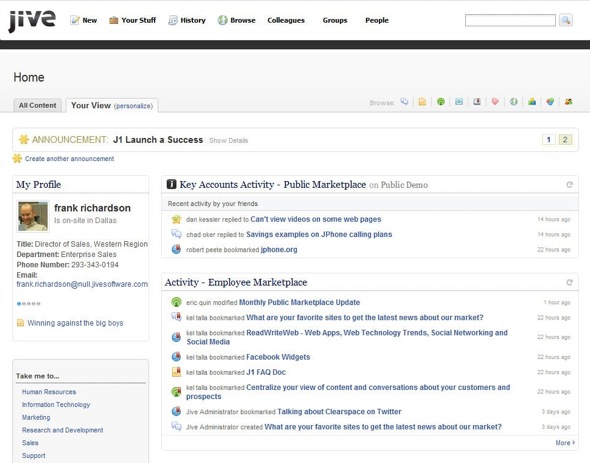 One of those modules promises increased productivity by letting you view your department, partner, and customer communities within a single workspace. That may sound like a relatively small improvement at first, but Lawrence says it’s significant because a user will often want or need to work in multiple Jive communities. Without the bridging modules, those communities exist as isolated silos.

Other modules include video, social bookmarking, and analytics and “insights,” which measure discussions and sentiments surrounding specific topics in your Jive communities.

Although Jive is announcing SBS 3.0 now, it won’t actually be available for another week. Lawrence also previewed the product during the Productivity 2.0 panel that I moderated at last week’s DEMO conference. You can see the video of that panel below; the Jive demo starts at around seven minutes in.