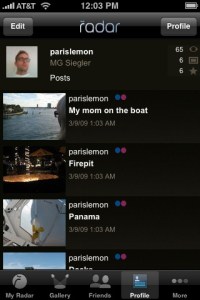 When starting a conversation, you need a topic. In Radar’s case, that topic is pictures. Users upload them, and other users comment on them. The problem is that Radar is still a growing network, and so it may not offer many conversation starters for new members. Enter Flickr.

Flickr, Yahoo’s hugely popular online photo service, has billions of photos. Thanks to a new integration with Radar, these photos can now be carried over to the Radar service. Equally important, photos can be carried back from Radar to Flickr. And perhaps more importantly, the comments/conversations about these photos are synced back and forth between the two services.

I’m using this integration right now on Radar’s solid iPhone app. Once I okay my Flickr credentials to be used on Radar, I can pick and choose which of my Flickr contacts I want to see within Radar. The ones I pick have their last 20 photos from Flickr fetched and integrated into my Radar photo-stream (you’ll see a small Flickr logo next to pictures that are imported). From there I can comment on any photo just as I would on a Radar one, and it will show up in the app and on the Flickr page for the photo itself.

This works because Radar worked closely with the Flickr team to best utilize its application programming interface (API). In fact, the Flickr team added a few API calls (ways to access the data), just to get this integration working perfectly on Radar.

This Flickr integration works not only on the iPhone, but on the regular web version of Radar, as well as on its Java, Windows Mobile and BlackBerry apps.

One nice thing about this feature is that it cuts down on the places I need to upload photos to. If I put a photo in Radar for example, it can automatically be added to my Flickr account and vice versa. Since Flickr still doesn’t have an official iPhone app (just a tailored mobile site), Radar with Flickr photos/comments syncing makes for a compelling option even if you don’t even care to use Radar.

The company is exploring the possibility of integration with other online photo services as well, Radar founder and chief executive John Poisson tells me. He notes that the connection with Flickr was a natural one because Flickr’s community was already using pictures to facilitate conversations in many ways. Service like Facebook are also doing that to some extent, but of course, Facebook does not yet allow its pictures to leave its site. Though Poisson, like most others, see it moving in that direction.

Radar is a part of Tiny Pictures, a company which raised a $7.2 million second round of funding nearly a year ago from Draper Fisher Jurvetson and previous investor Mohr Davidow Ventures. Before that, the company had raised $4 million in a first round, and received angel money from the likes of Reid Hoffman and Joi Ito among others.

Radar’s iPhone app is free in the App Store. Find it here.