Kosmix, the company that automatically generates informational pages about any topic, is using its technology to improve the news-reading experience with a new product called MeeHive.

Okay, so I’ve probably got many of you rolling your eyes already. But I’ve been playing with MeeHive for the past week, and while it hasn’t replaced Google Reader as my primary destination for news, it’s actually pretty useful. If the site gets much better, I might have to reconsider that decision.

“The problem [with Google Reader and similar applications] is you have to go and subscribe to specific feeds of specific sources,” says Kosmix founder Anand Rajaraman. “But most readers don’t care where that news item appeared. The news reader paradigm is the web like it used to be, back when you had to type in every address into a URL bar.”

MeeHive is an interesting cross between Google News, Google Reader, and social news sites like socialmedian (which was acquired in December by business network Xing). I’d be more skeptical of the product if I wasn’t currently jumping between those sites to meet different needs — Google Reader to stay on top of day-to-day news, Google News when I want to see all the coverage around one topic, plus news aggregator Techmeme for the latest tech headlines, and microblogging service Twitter to share and comment on the articles I find most interesting. 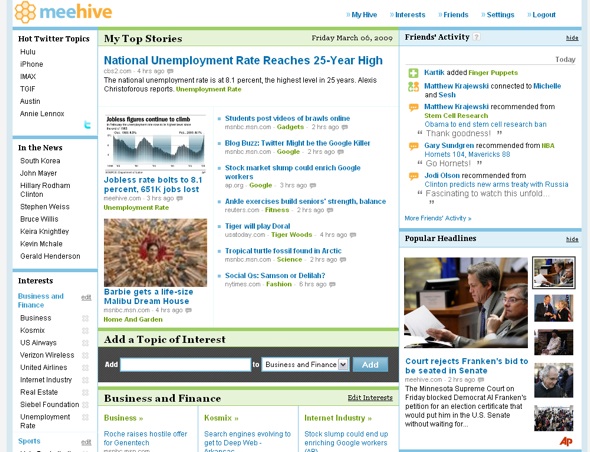 MeeHive tries to meet all of those needs. Basically, you start out by entering the topics that you’re interested in following, then the site provides a personalized home page with a list of “top stories” across all your interests, plus sections where you can focus on specific topics.

And where a Google News Search, like Google itself, is built around locating keywords, Rajaraman says MeeHive uses Kosmix’s algorithms and taxonomy to genuinely group news stories by topic — so that, for example, venture capital stories won’t just be limited to articles with the words “venture capital.” The stories, he says, are ranked by how many publishers write about a specific topic, as well as how many clicks each article gets. You can also connect with other users and see what articles they liked.

My main complaint is the limited range of sources, at least compared to Google News. To cite a rather self-centered example, my venture capital section doesn’t include any stories from VentureBeat — although it does include VentureBeat posts that were syndicated in The Industry Standard. In MeeHive’s defense, it’s still a young product, and even Google News went a long time before listing VentureBeat. (I know, it’s crazy, right?)

Rajamaran says future improvements include more customization for readers, such as the option to prioritize certain sources. The service’s business opportunities are pretty obvious, though they may not be grand slams due to the downturn — advertising can be pretty well-targeted, especially when you drill down on a specific topic, and these sorts of news modules can also be added to the general Kosmix site.