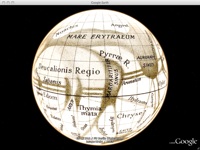 My favorite new feature is the ability to view historical maps. This isn’t as substantive as viewing historical images from Google Earth, which can reveal changes like the shrinking polar ice caps, but it’s still fun — especially for a science fiction nerd like me — to see how our awareness of Mars has evolved. I’m particularly excited to see Percival Lowell‘s view of Mars; his belief that there are canals on Mars was one of the inspirations for the portrait of a dying Martian civilization in H.G. Wells’ classic novel War of the Worlds.

Meanwhile, the Live from Mars feature streams of images from Arizona State University’s THEMIS camera — it isn’t actually live, but the delay is only days or hours, rather than the standard months. I can’t imagine that Mars is changing so quickly that live images are much different from older pictures, but astronomy enthusiasts will probably be pleased. If, on the other hand, you’re not that familiar with Mars, there you can watch tours narrated by Bill Nye (a staple of my childhood) and Ira Flatow of the Science Friday public radio show.

Here’s a video highlighting the new features of Mars in Google Earth.