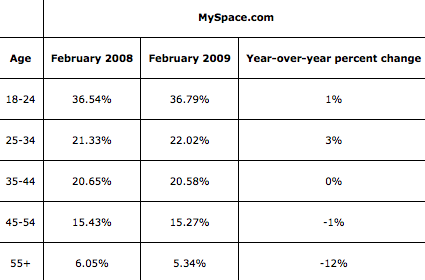 MySpace has been maligned for what appears to be stagnant if not declining traffic in its core U.S. userbase. But the story is more nuanced, and not so dire. Sure, MySpace’s overall traffic has taken a big hit over the last year — a 28 percent drop from 72.92 percent of the U.S. social networking market a year ago to 52.21 percent this past February, according to new numbers from web measurement firm Hitwise. And sure, Facebook has meanwhile grown 149 percent from 14.46 percent of the market to 36.03 percent.

But what’s happening looks more like an online demographic shift than impending doom. MySpace — at least for the time being — continues to be the best way to reach teenagers and young adults. As you can see from the Hitwise table, above, MySpace has actually grown one percent among users ages 18 to 24. The sharpest drop-off has been in older demographics. Facebook has already self-reported extensive growth among those older than 30. Likely as a result of that growth, the proportion of its users ages 18 to 24 has actually fallen 27 percent, from comprising 40.14 percent of its site to 29.22 percent. Specifically, Facebook has previously said that one of it’s largest growth areas is among women over 55. 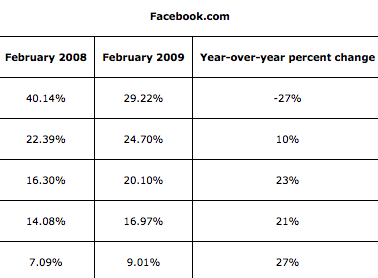 Pairing these traffic estimates with those of another third-party, comScore, the picture comes into sharper focus. MySpace has stayed fairly constant at 76 million monthly active users in the U.S., while Facebook grew to 57 million as of January. The caveat is that comScore tends to overcount social networks (when Facebook shares internal data, it comes out one third less than what comScore claims). Still, Facebook recently said it was growing by one million users a week in the U.S.

So what does this mean? MySpace grew out of entertainment, like helping musicians connect with their fan bases; Facebook grew out of college campuses. MySpace continues to be focused on pop culture, providing a range of music, video and offline entertainment services — this seems to be what its younger users want. The average user spends around half an hour on the site; the average user is also young. The company makes money through ads and related services aimed at these users. So the worst thing one can conclude about MySpace right now is that it isn’t going to be everything to everyone, and so may be even more of a content-focused niche site in the future. Facebook, with its efforts to promote Twitter-like status updates and FriendFeed-like feeds — and its booming international growth — continues to gun for being a central web service. 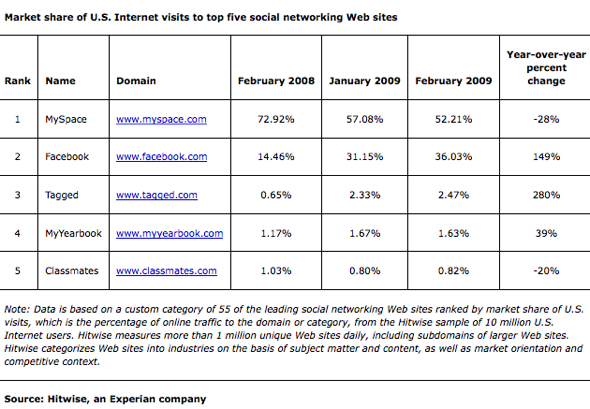