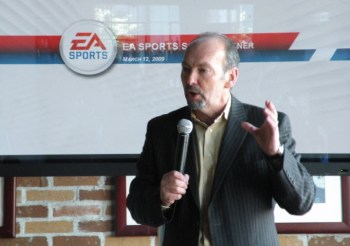 Electronic Arts sports game chief Peter Moore held court in downtown San Francisco last Thursday as his division offered the press its first look at 2009 releases like Fight Night Round 4, Tiger Woods PGA Tour Golf 10, Grand Slam Tennis, Tiger Woods on the iPhone and EA Sports Active. VentureBeat sat down with Moore during the event in a one-on-one interview and here is what he had to say.

VB: Last year, the big emphasis for EA Sports on Wii was All-Play (an easier, more accessible mode of playing). This year, I saw that All-Play has been embedded as a feature inside the new Tiger Woods PGA Tour Golf 09. Will this happen across the board for new Wii games?

PM: All-Play has been successful, but rather than making it the entire experience, we’re focusing on things like the Wii Motion Plus (improved game controller from Nintendo) and the new art style, both of which you see in our new tennis game.

VB: When you look at the current recession, do you see the Wii mass market casual audience buying a new Madden or Tiger Woods game every year? They’ve proved they’ll buy Tiger Woods. I mean Tiger Woods is by far our number one-selling game on the Wii. It lends itself incredibly well to the Wii. I think it’s a good question whether they’ll buy it every year, but it seems to me that audience is replenishing itself pretty considerably every year with brand new consumers. So our numbers on the Wii will go up again this year.

VB: This is the first year NASCAR fans won’t have a simulation game. Did you learn from your experience with NASCAR that the fan base doesn’t need a new sim every year like the Madden fan does?

PM: Well, I think there may be a little bit of that, and I think that what we have learned as well is that with NASCAR we need to look at different business models of what we can do with this consumer. NASCAR is looking at different ways they want to go to market with their video game license. We’re also considering the same thing. We’re still talking with NASCAR. We know we’ve had real success with NASCAR Kart Racing. We think we’ve really nailed that. It’s a great game. It’s selling very well, and it will sell for a long time. We also learned that getting out at Daytona (500) time is a big deal as well. We have a full NASCAR season, and I know this game will get a bump in the holiday because it’s just a fun game. 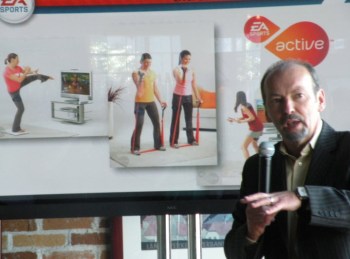 VB: This is the last year for THQ and JAKKS Pacific’s WWE license. EA has owned professional wrestling licenses in the past. Would you return to sports entertainment?

VB: Speaking of mixed martial arts, when you look at the sports landscape today, MMA (mixed martial arts) is where all the attention is. With THQ locking up the Ultimate Fighting Championship license, are you interested in getting into the MMA ring?

PM: Obviously, there’s lots of options, but again you have to ask, how powerful are the UFC licenses? Is there room for a second player? Do we add value? Because you need to do it differently. You just can’t do a mixed martial arts game with no license and no fighters and THQ has that. I’ve watched UFC since Crave had it on the Dreamcast. So I’ve watched that whole thing and the UFC nearly going bankrupt and Dana White revitalizing the sport. They put their money where their mouth is, but again, THQ has the license, and there’s nothing we’re going to do about that. Until we can make a difference and do something very different, we’ll continue to watch. 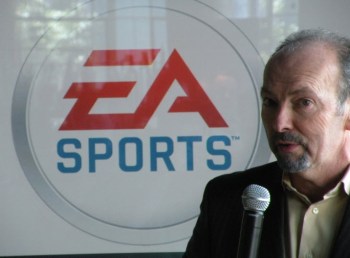 VB: Another license that’s going to be up soon is baseball. Is this a sport you’d like to get back into after so many years on the sidelines?

PM: I love baseball. Obviously, MLB decided to go with a unique hybrid of first-party and third-party exclusive, but as I’ve said many times, when the time is right to sit down with MLB and talk about what we can do [for them with our great baseball engine], then we’re ready. But right now Take-Two and Sony have the licenses, so until MLB changes things there’s no conversation I can have.

For more information on the gaming market, please check out VentureBeat’s GamesBeat 09 game conference on March 24.