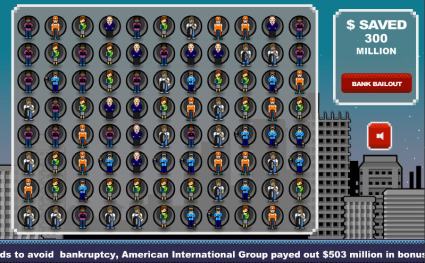 Lots of corporations are eliminating redundancies these days. Now you can do the same in a free web game dubbed Layoff.

Inspired by games that require you to match three objects, such as Bejeweled, you start with a grid of workers. You swap positions of any two workers to align three or more workers of the same type. Then the workers disappear and you are told exactly how much money you’ve saved by eliminating redundancies. Players play from the side of management. The workers are eventually replaced by bankers, who can’t be eliminated.

Some might view it as distasteful, but it’s dark humor with the aim of sensitizing people to problems in a culture where people are often valued as so much cattle. As a reminder that these workers are real, you can read the bios of people who are eliminated in the name of workplace efficiency. The music is cute but has sad undertones.

The game was produced by Tiltfactor and Values at Play, two nonprofit groups working with National Science Foundation and Microsoft funding. Mary Flanagan, digital humanities chair at Dartmouth College, headed the project. She said in an interview that the game has been well received as a commentary on human values. The original idea is more than two years old, before there was a layoff crisis, but it’s timing couldn’t be better. At the bottom of the game window, various messages scroll by delivering economic facts.

“We were trying to make these abstract figures real,” Flanagan said. “It’s kind of a protest game.”

Flanagan said a team of a couple of artists, a programmer and a couple of part-timers was able to produce the Flash-based game, which runs on the PC or the Mac. So far, Flanagan said the game has been received well by the blogosphere and has proven so popular that it’s overloading servers. Flanagan’s overall goal is to create educational video games that aren’t boring.