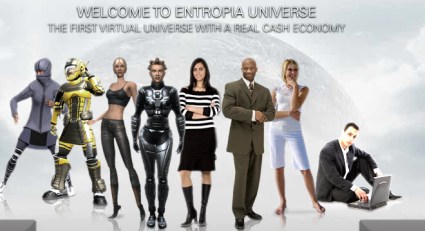 Sweden-based MindArk is announcing today that Entropia Universe, which is actually a collection of virtual worlds, now has a real bank. The Mind Bank, which serves as a central bank for all of the different virtual worlds within the Entropia Universe, has been granted official status by the Swedish Financial Supervisory Authority (Finansinspektionen).

MindArk chief executive Jan Welter Timkrans said the development is a milestone for virtual worlds, which have realistic economies built around currencies that can be exchanged for real money. Mind Bank fully incorporates real money transactions with the activities in a virtual world. It processes millions of transactions.

The virtual currency in Entropia Universe is known as a PED. It has a fixed exchange rate of 10 PED to the U.S. dollar. The 10-year-old Entropia platform has been developed over the past decade at a cost of $40 million. It was launched in 2003. The Planet Calpyso world within the universe has been generating a profit since 2004 and has more than 820,000 registered users in 200 countries. The user-to-user transactions within Entropia Universe exceeded $420 million in 2008.

David Simmonds, director of business development, said that the bank has already handled more than 600 million in-game transactions per month for just Planet Calypso. That is expected to grow dramatically once other sponsored worlds are launched. Among the worlds in the works is one being built by Creative Kingdom, an architectural design firm. Another is SEE Virtual Worlds, which is working to create movie-based planets in the Entropia Universe.

Timkrans said that deposit made into the Entropia central bank will be dealt with according to strict European banking regulations. The bank will be continuously monitored and audited by the financial authorities, providing added security since the deposits a guaranteed by the national government. MindArk can also issue bank cards directly to its customers.