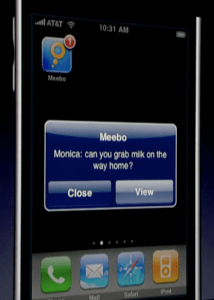 Let me be clear right off the bat: Contrary to what some of you may believe, I do not hate text messaging. What I hate are the ridiculous fees mobile carriers push on us when we use it. These costs are so absurd that a number of times I’ve written about the need for a viable alternative to force carriers to bring the fees down. Now, it looks like we may have one of the best alternatives yet — if you own an iPhone.

While never explicitly stated during Apple’s iPhone 3.0 software presentations on Tuesday, its new Push Notification system allows users to get messages in real-time without using the SMS (text message) delivery service. One of the alert options for Push Notification is a bit of text that pops up on your screen that looks like a standard SMS message, but it’s not. Instead, that message is being sent to you from Apple’s servers, free of charge.

Let me repeat: free of charge.

With SMS, carriers usually charge anywhere from 10 to 20 cents per message. Of course, most people opt to buy bundles of messages to save money, but $5 to $15 a month on top of your already expensive bill is ridiculous. With a lot of new smartphone devices (like the iPhone), you’re paying for unlimited data already. But the carriers don’t count SMS as data, and so they charge us more money for a service that costs them next to nothing.

During the iPhone 3.0 event, web messaging service Meebo previewed its new application. Basically, it lets you sign on to all of the instant messaging services you use and have friends on. If you see someone online, you can send them a message. But the key is that with Push Notification, you can close the application, and it will ping you when someone is sending you a message.

So instead of communicating with a friend by way of a costly SMS message, we can both use this Meebo app and have a conversation over IM instead, even if neither of us has the app open at the same time. And since Apple made its text type of alert look exactly like an SMS alert, the transition should be a pretty easy one. 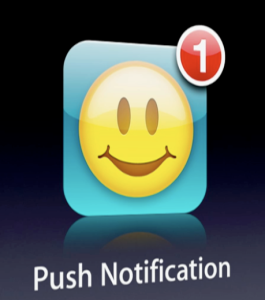 It’s not a perfect system. For example, it will still require that you open Meebo to send a message back. But right now you have to open the Message app to respond to an SMS, so it’s really just a question of which is faster to open. And Meebo is just the first app to show off this functionality. Expect all of the other major IM clients, like AIM to follow suit with their apps.

The larger issue that remains is that this may only be a viable alternative for iPhone users. If your friends don’t have iPhones, SMS still may be the way to go. Although, a number of other smartphones allow for applications that actually do run in the background, including IM apps, so that may be even faster than the Push option. And you’ll obviously be able to talk to anyone over IM, no matter which phone they’re using.

Apple didn’t completely screw over AT&T on the text messaging front with this announcement. It also announced support for MMS, media-rich messages, finally. With this support, Apple’s Message app can now include pictures, audio, contact information and even some location data, which makes text messaging much more compelling. But still, from a core text messaging standpoint, SMS on the iPhone may have some serious competition.

And that’s good. As I said, I don’t want text messaging to die, I actually really like the concept and functionality. I just hate the costs. Perhaps this is will be an important step in driving those costs down.