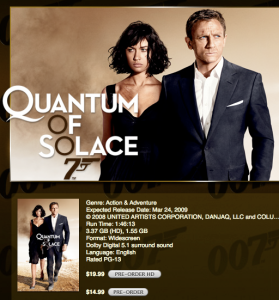 Ever since Apple launched HD movies over a year ago, I’ve always thought it was kind of odd that it was restricted to only movie rentals, and only ones made on the Apple TV device. Today, that limitation has been lifted.

HD movies are now available to rent and buy in the iTunes store. This means that anyone who has the software, running on either the OS X or Windows platforms can get HD movies through the service. They will cost slightly more than their standard definition counterparts — $19.99 for new release HD downloads, and $4.99 for new release HD rentals (as it has been on the Apple TV). New release films in standard definition are usually $14.99, while they cost $3.99 to rent.

The selection of movies for purchase in HD is currently very limited, as Silicon Alley Insider points out, but that will change as iTunes expands its offerings in the new format. Currently, Apple is showcasing Transporter 3 and Punisher: War Zone as HD downloads, as well as the upcoming releases Quantum of Solace and Twilight.

And when the library expands, I can safely say that I will not buy a DVD again. I haven’t bought one in quite some time already, but I was reserving the right to just in case there was a movie that I really wanted in slightly better quality than the standard definition iTunes format. One movie I was thinking of buying on DVD was Quantum of Solace. Not anymore.

HD downloads are another chink in Blu-ray’s already weak armor. Sure, Blu-ray movies are in 1080p quality, while iTunes HD is 720p, but most users simply do not notice or care about the difference, as is evidenced by Blu-ray’s failure to take the market away from the older DVD format. Digital distribution is the future of movies. Blu-ray was always just a bridge to that, and now that bridge is a bit more narrow.

But there’s a downside to HD movie downloads: Their size. For example, the Transporter 3 download in HD is 3 gigabytes. I don’t mind this because I bought a 1 terabyte external hard drive just to store my iTunes library, but for most users, this is a factor that will limit HD purchases. The problem is even worse with TV shows in HD, which users can already buy, and which take up tens of gigabytes of storage for full seasons.

That’s why it’s imperative that Apple launch a cloud-based storage solution that can offer up movies you have bought when you need them — either to stream or to download and take on the go. This solution has been rumored under the name “iTunes Replay,” and with HD downloads, I would bet that it (or something similar) is definitely in the works.

I’m still not sure that movie rentals and streaming aren’t going to be a problem for Hollywood going forward, as there is much less incentive to buy movies these days, but this is a move in the right direction for the studios to keep the money flowing in.