Gmail is by far the most-used web application in my life, and OtherInbox has just announced a new way to help me manage the flood of emails coming through it every day.

The service, which launched last year to cheers at the TechCrunch50 conference, helped users to better organize their email by letting them easily make multiple email addresses from a single domain. They could save their primary email address for important contacts and give out secondary addresses to services they want more privacy from. OtherInbox then organizes incoming email based on which address it was sent to.

The way it organizes Gmail is a bit different. The offering, which just opened up to the public last Friday, asks for your Gmail login. It then analyzes your inbox and groups together messages it thinks are related to the same subject. For example, when it analyzed mine, it grouped dozens of messages from Bank of America and thousands from Twitter together. Gmail archives all of those messages (which doesn’t delete them, just moves them from your inbox), but when you login to OtherInbox, you’ll see that each of these subjects has its own inbox of sorts.

Of course, you can already do this within Gmail itself, using Labels. The problem is, it can take a while if you have messages with a lot of different subjects that you want to sort, whereas OtherInbox does it all in one step. This ease of use is what OtherInbox chief executive Josh Baer emphasized when I met with him at the SXSW festival in Austin, Texas last week. “This opens us up to a lot more people who can set this up in two minutes and not have to do anything again,” Baer said. 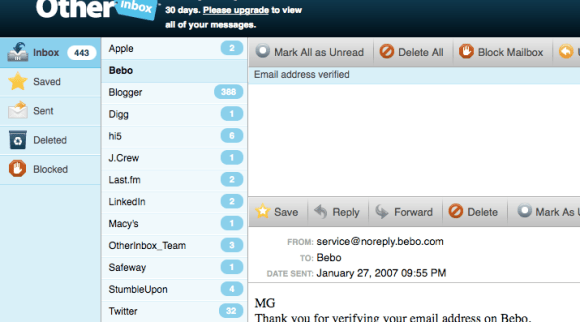 He went on to compare the initial release of OtherInbox to the Telsa Roadster, a $130,000 electric car. This new Gmail version is more like the Tesla Model S, it’s counterpart set for release next year at the more affordable $60,000. Not everyone needs all the power of the full version, Baer noted.

Unfortunately, while the Gmail version of OtherInbox is free, it’s only free going back 30 days. To see message sent before that, you’re still going to have to buy the OtherInbox premium service, which runs $19.99 a year — probably not a bad deal if you really need help organizing your mail. The premium version supports IMAP, which means it will also work on mobile devices.

Speaking of mobile, Baer noted that OtherInbox is thinking about making a mobile app for some of the app stores out there further down the road. While Apple currently doesn’t seem like it wants to play too nicely with other email apps, perhaps that will change with the upcoming iPhone 3.0 software release.

And ultimately, OtherInbox wants to be on any platform it can get on. Gmail support is the first step, and Baer notes that soon Microsoft Outlook, Hotmail and Yahoo Mail should be supported. Yahoo in particular interests him because the Yahoo Open Mail platform will let OtherInbox integrate well into the service.

The Austin, Texas-based OtherInbox is currently angel-funded. Baer expects that sometime within the next six months the company will do a proper first round of funding as well. Its premium paid model is only the first step in generating profits. The company wants to build up a critical mass of users first, and then it will look at monetizing some of the data it’s collecting in a way that other email services do.