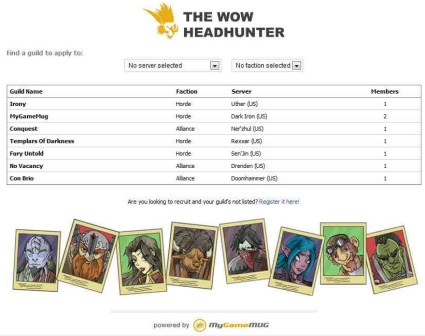 MyGameMug started out as one of a bunch of social networks for gamers . Now it’s launching WoW Headhunter , which is a tool to recruit players for World of Warcraft guilds.

Many players have more fun playing the massively multiplayer online role-playing fantasy game by joining groups of player friends known as guilds. They go on missions together and share in the loot. WoW Headhunter is an intelligent job board that analyzes guild leaders’ personalities and then matches players. The service is free.

The service looks at 10 personality traits and then feeds candidates to the leaders. The company says this approach is scientific and reduces the time it takes to recruit candidates, which can take three to six weeks per candidate. Guild leaders take a short personality test and then start recruiting.

Matthew Low, known as Matticus, a guild leader and columnist for the WoW Insider web site, said that it’s useless to recruit people who don’t fit with a particular guild and that he welcomes the WoW Headhunter tool.

San Mateo, Calif.-based MyGameMug was founded by Ray Lau and Erik Yao, who are a couple of avid gamers. They started the company with the hope of eliminating the frustration they experienced over incompatible players in their favorite games.