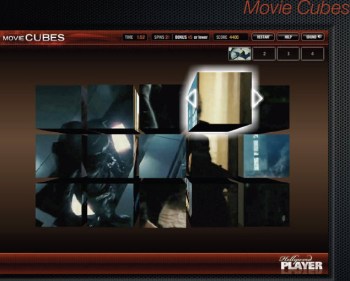 Here’s some breaking news. The winner of the GamesBeat 09 Who’s Got Game? start-up competition is Exponential Entertainment. They won both the judges award and the people’s choice award.

The company has figured out a way to “game-ify” movies so that they’re more engaging for consumers. The company plans to launch its beta test in the second quarter and formally launch the game site in the third quarter.

The company was founded by Bill Kuper and Dave Long, inventors of the popular movie trivia DVD game series, SceneIt? The series generated 25 editions and more than $500 million in sales for Screen Life, the predecessor company. In their new startup, Long and Kuper are essentially taking some of the same movie trivia games to the web and coming up with a more interesting mix of interactivity.

“We can help brands get more out of their media,” said Long.

The company has already created a variety of short web games. They include:

The company has eight employees and is funded by Kuper, chief technology officer, and Long, chief executive. They are raising a $2.5 million round now, which will help get them beyond the launch of the game. Much of the game development has been outsourced to third parties.

Long said the company hopes to blend casual games, social media and movies. Its games aren’t hard to make because so much of the content is filled in via video. A few of the employees have to spend an inordinate amount of time looking through video clips. Meanwhile, the company is negotiating to secure all of the rights for the films that it wants to use. By launch the company hopes to have a dozen games.

On the social front, the company will build in rewards for loyal consumers who come back again and again or participate in various competitions. Players can earn and spend points on the site, but they can also donate the points, which are worth real money, to a charity such as Global Green USA or Red. You can make friends on the site or import your friends from sites such as Facebook or MySpace.

The company hopes to promote the site through retail outlets. It could, for instance, put currency cards for the site into popcorn boxes at video stores. Revenue will come from premium content offerings that consumers pay for, targeted sponsorships, virtual goods sales, affiliate commissions, and licensing royalties. The company may put the games into widgets that others can run on their sites.

The winner will get introductions to our friends in the press and the investor community, an Astro Gaming A40 sound system, and two weeks of free advertising on VentureBeat.