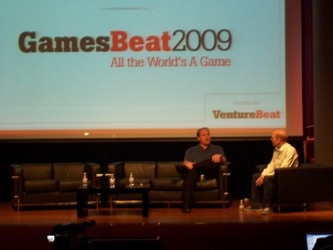 “It’s been about 28 years since I started gaming,” baseball star Curt Schilling said at GamesBeat 2009. He started with the first Apple computer he ever saw.

“For the last decade, [massively multiplayer online games] have been the focal point of my gaming,” he said. Schilling was interviewed at VentureBeat’s game conference in San Francisco today. He said he was introduced to Ultima Online by a teammate, but didn’t care for the game.

Now, he has his own game company, 38 Studios. “The genesis of the company is probably 15 years old,” Schilling said. He kept a notebook with ideas, and started actively working on the project six or seven years ago.

And Schilling described himself as being just like ever other gamer, playing a game and thinking, “Oh, my God, I could do this so much better than them.”

But when he started to think about his post-baseball career, Schilling said he “wasn’t going to open a restaurant, or a car dealership.”

He described how much he loves running a company, and working on a world that gets a little more realized with every week. Creating an MMO from scratch is a large project, however, and Schilling joked: “Some days I wonder why I didn’t just make a first-person shooter.”