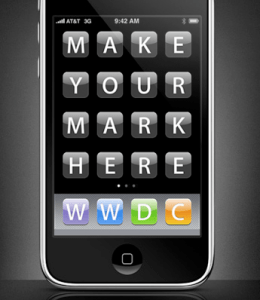 Apple has just officially unveiled the dates for this year’s Worldwide Developers Conference (WWDC). It will be June 8 – 12 in San Francisco. As expected, the focus looks like it will be on the iPhone OS and Mac OS X Snow Leopard, judging from the website.

These dates are almost spot-on with the days predicted earlier this month by The Baltimore Sun after it looked at the schedule for The Moscone Center, where the conference will be held. The paper also predicted June 8 would be the day Apple’s new operating system, Snow Leopard, would be unveiled. It’s looking more and more likely that Apple will use the keynote at this event to unveil Snow Leopard, although it isn’t expected to launch until a few months later.

WWDC could also be the event where Apple shows off the next hardware version of the iPhone. A couple of weeks ago, it showed off the new iPhone 3.0 software, which will work on both the current iPhone 3G and the original iPhone model, but there’s been much speculation about a new device. This includes some newer rumors that it could feature video capabilities and better graphics for gaming.

Seeing as the event is in June, one question that’ll undoubtedly come up is whether chief executive Steve Jobs plans to attend. When he went on medical leave in January he said he’d be until the “end of June.” But a major event with large announcements may be enough to bring him back a bit early, assuming he’s healthy.

Last year, WWDC sold out for the first time, so Apple is recommending you buy your tickets early if you want in.