The winners included PC and console game Fallout 3 by Bethesda Softworks, which beat out the favorite LittleBigPlanet to win the Game Developers Choice Game of the Year. It’s win came as a surprise, since although the role-playing game has been a critical success, it hasn’t been winning the biggest awards.

Blueberry Garden, a game created by Erik Svedang for the PC., won the top IGF award as best indie game. It’s like a fairytale built into a game, where you fly through clouds and observe an ever-changing ecosystem.

And Tag: The Power of Paint won the top student game. Created by a team at Nintendo’s 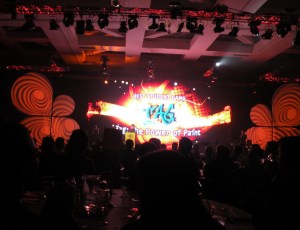 DigiPen Institute of Technology in Seattle, it’s a puzzle game where you can splash paint over every bit of the environment.

It’s always a thrill to listen to the roar of applause as the winners are announced. The crowd loves the indies, which include everyone from students to veterans who run tiny video game studios on shoestring budgets. Mega64 produced some hilarious video satires of the games for the occasion.

As all 16,000 or so attendees pile in for the main conference, the awards program is a rare gathering of both the industry fat cats and the little people. Games are a huge business, but the awards remind us they’re also an art form rich with emotion and passion. The indie award winners expressed their defiance of the mainstream game publishers, their individualist passion for the art, and belief in their games.

Held as part of the Game Developers Conference, the Independent Games Festival is now in its 11th year, while the choice awards (where developers themselves select the best games of the year) is in its ninth. Both are sort of like the Oscars of games, with the IGF focused on small indie games and the choice 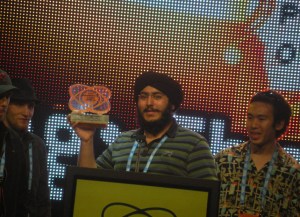 awards focused on the pros. The interesting thing is that the opening of new platforms, such as casual web games or the iPhone, is helping the indie games become commercial successes more than ever. There are, for instance, more than 6,800 games on the iPhone and more than 5,000 games on Facebook. Games are one of the biggest money makers on MySpace.

One of last year’s big winners, The World of Goo by 2D Boy, went on to be one of the big PC game hits of 2008. The game also became one of the stand-out hits on Nintendo’s Wii as a downloadable WiiWare game. So the award winners are increasingly the place to look for promising startups.

Here’s a rundown of the other awards winners:

Hideo Kojima, received the Lifetime Achievement award for his work on the Metal Gear series and contributions to more than 50 games over the past 20 years. Kojima, 45, said he doesn’t plan to retire and hopes to keep making games until the day he dies. 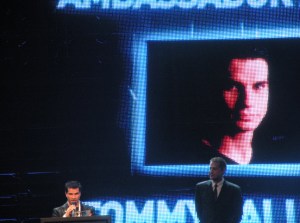 Alex Rigopoulos and Eran Egory of Harmonix (a former struggling startup now owned by Viacom’s MTV) won the Pioneer Award for creating both Guitar Hero and Rock Band, two game franchise that have opened up the music game genre to billions in sales. They thanked the game development community for supporting them when they were poor, bedraggled indie developers.

Tommy Tallarico, a lifelong game musician, won the Ambassador Award for staging the Video Games Live concert series, where live orchestras play theme music from video games. The events have drawn as many as 100,000 people in an evening. Tallarico has worked on an astounding 275 titles.

While Sony/Media Molecule’s LittleBigPlanet title for the PlayStation 3 won several awards (such as best innovation), it didn’t sweep the category the way it did at the Academy of Interactive Arts and Sciences awards at the Dice Summit last month.

At the very end of the evening, Activision Blizzard’s Infinity Ward game studio flashed a trailer with a message. It noted that one of the hottest game franchises, Call of Duty Modern Warfare, will see a sequel debut on Nov. 10. That’s going to be a huge blast for holiday sales. It’s games like that one that will give the game industry a big shot at continued growth throughout the year.