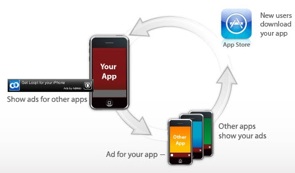 Mobile ad network AdMob is launching a way for developers who don’t have the money for a big advertising campaign to get attention in Apple’s increasingly crowded iPhone App Store — an advertising exchange it calls the AdMob iPhone Download Exchange.

The concept is pretty simple: If you’ve got an application with ad space, you can serve ads that promote other applications from the Download Exchange, and in return, you’ll get free ads on other applications yourself. The exchange uses AdMob’s technology to ensure it won’t serve ads to devices that have already installed the app being advertised and that ads are served in the correct geography and on the correct operating system. Developers will also be able to determine the exact ratio of paid ads to free Download Exchange ads.

This exchange, which is open to anyone in AdMob’s developer network, could be a powerful new promotional tool, but only if doesn’t get flooded with ads for lame apps. AdMob plans to control this by serving more ads for apps with high “installiness,” which reflects how often they’re downloaded and used.

The company announced the Download Exchange earlier this month. At the time, it hinted at grander plans to become a distribution platform for apps, not just an ad network. In the meantime, this has an immediate benefit for AdMob by creating more incentive to join its ad network.

The San Mateo, Calif. company has raised a total of $47.2 million from backers including Sequoia Capital and Accel.