Mobile developer Kinoma announced that its Kinoma Play mobile media browser will be available in Nokia’s Ovi Store and the Windows Marketplace (which will be included on all phones based on Windows Mobile 6.5 this fall). Microsoft has signed Kinoma Play as an anchor application, meaning it will be among the first to offer its application through the Windows Marketplace for Mobile.

At the Mobile World Congress I attended several weeks ago, rumor had it that the carrier folks who previewed WiMo 6.5 were quite impressed — and not only for strategic reasons to counter-balance Apple’s rise. Kinoma launched Windows Mobile and Palm Centro/Treo versions of its app last August. The new version of the app for Nokia’s S60 platform is easily the most impressive app for the platform I’ve seen recently, and made me wonder how Kinoma managed it to push the technical barrier on the platform. S60 is the largest platform under the Symbian brand, which in turn is the mobile OS with the largest traction in the world.

The media browser will also be previewed at both the Microsoft and Nokia booths at the CTIA Wireless show in Las Vegas, April 1-3. 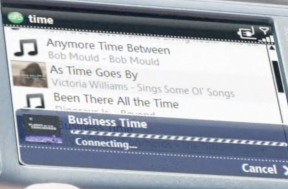 Kinoma Play makes it very easy to find, access, play and share media on your phone, PC and various social media sites. On most phones, when you try to find and play a podcast using a browser with an audio player — if you can do it at all — it probably takes over 5 minutes to do. In Kinoma Play, you can navigate to Search > Kinoma Guide with a couple of clicks, type in “Nokia,” and you get a list of every podcast in the guide that has “Nokia” in the title or description.

The company has put up several 30-second videos that give an overview of its search, pictures, podcasts and music options. They also address some of the problems that typically arise with these functions on a mobile platform, and show how Kinoma Play resolves them.

As you can see in the videos, the app offers a unique “everything in one place” mobile media experience that grants easy access to PC and streaming media from a variety of sites. For example, it lets users easily download photos from a home computer (via Orb), upload them on Flickr, and then play the resulting photostream as a slideshow with background music. Other integrated services include YouTube, Picasa, SHOUTcast and Live36.

Charles Wiltgen, Kinoma’s director of social marketing, says that “Kinoma Play is touch-friendly throughout and is designed to offer an experience as good as anything you’ve seen on an iPhone, but on your phone. Not to mention, Kinoma Play does lots of stuff that no combination of iPhone apps can do.”

While Kinoma Play is definitely impressive, I was curious about how Wiltgen plans to approach the competition. An integrated mobile solution like Kinoma’s should be a high priority for most players in the space, Google among them, it seems. Even so, Wiltgen brushed the questions off, dismissing YouTube and music/MP3 players because the company “doesn’t use them as a reference for how things should work. . . . In the time it takes a competitor to copy one feature or service in Kinoma Play, we can implement five more” because of a “platform-agnostic technical base which has been three years in the making,” Wiltgen explained.

I asked two developers I know about this assessment. Both maintained that a similar app could be built for the iPhone and Android platforms within six months at the latest. A lot of the heavy lifting in this direction has already been done by these platforms.

Still, Mobile user experience expert Barbara Ballard, says there are a few barriers to entry for possible competition. The choice of the S60 platform may have been strategic in this sense. App integration is particularly difficult on this platform, but Kinoma has the technology to jump these hurdles via its technical base, and therefore can differentiate itself. This sounds pretty smart, but the advantage it affords is probably temporary, as the Symbian platform based on S60 is going open-source with the first software release midway through the first half of 2009.

Based somewhat on this slight advantage, Kinoma Play will cost $30. This seems like a lot, but as Wiltgen told me, “Simple local-only MP3 players for Symbian are $10 to $25,” and compared to them, the app certainly offers additional value.

While Kinoma Play dramatically improves how one can manage mobile content, I wonder how the app will be received, especially considering that Ovi and Windows Marketplace are still very much works in progess. A couple od big questions remain: How easily will potential users be able to find Kinoma Play, and will they be willing to pay for it?