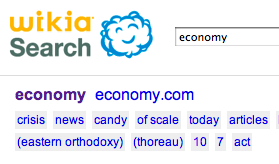 Wikipedia has been one of the biggest successes in the history of the Internet. So has Google. So on paper it makes some sense that combining the two would result in a service that would also be hugely popular. Unfortunately, that didn’t work out so well for Wikia Search.

The wiki-style search engine started by Wikipedia founder Jimmy Wales, is closing down, Webware first reported earlier today. In confirming the news, Wales attempts to deflect the bad news by pointing to the success of Wikia.com, Wikia Search’s parent, in terms of growth over the past two years. But towards the end of his post, he concedes that Wikia Search has not had the success the company had hoped for.

But the biggest factor in his decision to shut it down was apparently the economy. “In a different economy, we would continue to fund Wikia Search indefinitely,” Wales writes. He goes on to state that he believes in the power of search on the Internet and makes a General MacArthur-esque vow to return to the field in any way he can. 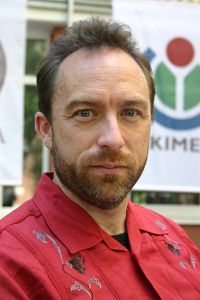 Wikia Search worked like other search engines, except that anyone could alter the results, like they would an entry on Wikipedia. The idea was apparently good enough for Google also to take a stab at it with SearchWiki, a less-customizable take on the idea that is now a part of Google’s core search experience.

When Wikia Search launched, some touted it as the “Google Killer.” Hype doesn’t get much bigger than that on the Internet, and not surprisingly, Wikia Search could not live up to it. Google Search has simply gotten so dominant that not even the other big players, Yahoo and Microsoft, are able to compete with it in a meaningful way. It’s similar to the way in which Wikipedia has grown so dominant that it’s eliminated the need for Microsoft’s Encarta and is making it difficult for Google’s own take on the idea, Knol, to flourish.

Wikia Search also suffered from some branding issues. It seems to have settled on “Wikia Search,” but it’s previously been called “Search Wikia” by us and others. And I’ve been told by the company that both names were correct at various points.

According to its own stats on the site, there have been over 11,200,000 queries on Wikia Search over the course of its life. No matter the state of the economy, it’d take a lot more than that to “kill” Google.