Massive auction website eBay has opened its platform to accept applications from third-party developers, adding to the range of tools for the site’s professional and casual sellers. This summer, the site will essentially open an app store filled with widgets and apps (for free or at a price) built by outside developers.

To throw out a few examples, apps on eBay can help sellers automatically manage their shipping and inventory processes, allow them to gather market research based on activity on their eBay sites, provide more effective customer service, and integrate with their existing accounting systems. eBay has been fielding demands for these features for a while now, and says that the active participation of third-party innovators will help it meet user expectations in a timelier fashion.

One major example of third-party development is UPS, which is already taking advantage of the beta of this new service. Sellers are now able to directly embed the company’s WorldShip widget on their eBay pages, allowing customers to manage their shipping preferences right there on the site. Apps like this one and others come at a price for sellers — and developers are required to give 20 percent of their revenues back to the auction site.

For a while now, eBay has offered a Selling Manager tool — basically a bundle of various applications designed to make life easier for sellers for a fee. And it’s proved fairly popular, drawing 270,000 subscribers. By bringing third-party developers into the fold, the company is essentially opening this tool to outside submissions. And developers will also have the ability integrate PayPal into their products.

To monetize, these developers will have the option to charge a subscription fee for their applications, given that they meet eBay’s standards of quality. To ensure these rigorous standards, the site charges developers $75 to vet each app and make sure it adds value for eBay users. Aside from UPS, e-commerce developers Terapeak, HostedSupport, ahTEXT.com and Cloud Conversion have all added subscription-based apps to eBay’s Selling Manager Applications toolkit (still in beta).

The site’s new development platform will be on display at the Web 2.0 Expo in San Francisco, which started yesterday and runs through April 3. No doubt that it will get a nice plug from eBay chief technology officer Mark Carges during his keynote at the event this afternoon.

Today, there are 13,500 applications on eBay, submitted by more than 87,000 member/in-house developers since the site started offering apps in 2000. But this number is sure to spike once outside developers get a hang of the API and prove that they can actually make decent money. 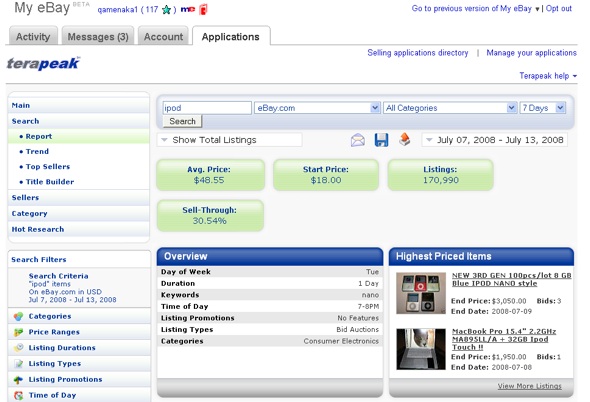