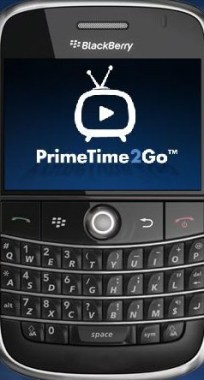 Rumors of Research In Motion’s TV app turned out to be true, as the Blackberry manufacturer revealed its PrimeTime2Go application at the CTIA Wireless conference. The full-episode download service is set to debut in May, and is one of numerous programs announced as part of RIM’s new Blackberry App Store.

From the looks of the release, a lot of the speculative details were correct. The QuickPlay Media-backed subscription service will run $7.99 a month, allowing select Blackberry smartphones to download and watch full-length television shows.

Although the app relies on a WiFi connection for downloads, users can save entire episodes to the device and view them later offline. Of course, since PrimeTime2Go is purely a download service, it lacks the ability to instantly stream content a la YouTube or Hulu.

In terms of content, RIM inked deals with NBC, CBS, MTV, and CW to provide the service with prime time shows like “The Office,” “CSI,” and “The Hills.” The release is a little sketchy on how long episodes will be made available, but assures that season-long subscriptions and new content providers are already in the works.

There’s a catch, though. At the time of launch, only the Blackberry Bold and the Curve 8900 handsets will support the new service. This not only shuns the scores of non-compatible BlackBerries on the market, but also non-Bold/Curve carriers like Verizon Wireless. RIM has vowed to rectify this by expanding PrimeTime2Go’s reach, but no date has been officially set.

Of course, there’s also the 500-pound gorilla in the room — Apple’s iPhone. A shiny new app store and the means to download shows definitely inches the Blackberry closer to striking distance. However, RIM’s content deal with the networks seems closer to Hulu’s (i.e., temporary access to content, focus on TV vs. movies, etc.) than Apple’s iTunes. And, let’s be honest — the success of iTunes casts an enormous shadow over the premium mobile video space, and RIM is late to the game.

Still, PrimeTime2Go might be the best move for RIM in the meantime. Apple has repeatedly proven that the process of procuring, licensing, and selling mobile video is extremely complicated, and it’s arguable that a latecomer like RIM is truly up to the challenge. But what will be interesting is whether PrimeTime2Go’s subscription model can drive enough revenue to be keep the full-length premium content coming.