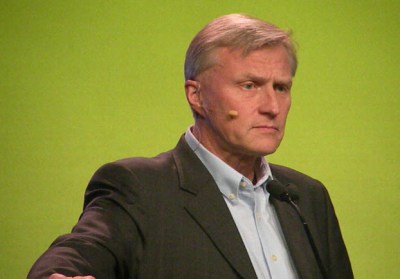 Anssi Vanjoki wants the technorati to know that there is more to mobile phones than the iPhone. The executive vice president of the new markets group with Nokia, the world’s biggest cell phone maker, gave a talk at the Web 2.0 Expo today in San Francisco in which he outlined the Finnish company’s plans to blanket the world in mobile applications. He showed off a bunch of research ideas we recently saw at Nokia Research in Palo Alto, Calif. We sat down for an interview with Vanjoki after his speech.

VentureBeat: A lot of the excitement now is about Apple and the iPhone. Do you view that the same way the world has viewed the Macintosh competing with the PC?

Anssi Vanjoki: In one way, yes. But when iPhone was introduced, I thought it was a great product. But what was even greater was that Steve Jobs, the No. 1 PR guy for the high-tech industry, focused all of his attention and energy on the part of the technology industry that Nokia wanted people to focus on. He has done a wonderful service to the whole industry. Not just the mobile industry, but the digital industry. He created a good device, and it is easy to develop for. But it’s done in the classical way that Apple has always done. It is very closed and tightly controlled. When you look at other phenomena in the world that have become big, it is those that were open. I think [the iPhone] has shown the way, but the real game is going to be played in the open field. In that way, the outcome may be similar to the PC versus the Mac. I don’t think the world will unite on one platform. There are several that will succeed. Our platform, Symbian, is an open platform and will make a major impact in the industry.

VB: What else do you have to do to ensure that a clone industry winds up being bigger than the initial stir created by Apple? 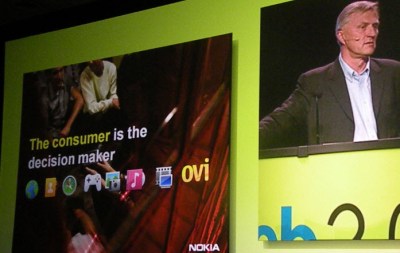 VB: Your Ovi store, a challenger to Apple’s App Store, is coming soon. What can you tell me about it?

AV: The store is coming in June. But of course, Ovi is a complete environment of services and solutions created by Nokia. The Ovi store is just one dimension where applications can be found. It’s different from other stores because of its relevance engine. It learns from your own use, the location where you are, and your interaction with your friends. You will not get tens of thousands of crap applications. You will get what is relevant to you.

VB: Apple had the good fortune of having iTunes already being used by tens of millions of iPod users. What gives you the same momentum?

AV: We have more than a billion people using Nokia devices. This is higher than any consumer durable good created in the history of mankind. That volume is completely unique. 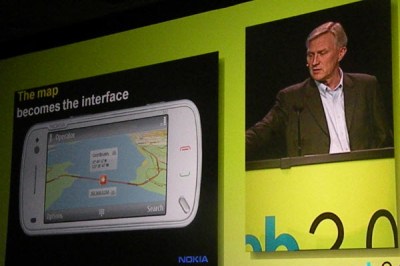 VB: Do all of them count, since a lot of those are dumb phones?

AV: I’d say the dumber they are, the more they count, since more people want to upgrade. That’s human nature. We have an experience. The next time we want something better. We have all levels supported by the Nokia brand, and we have very high loyalty. In this way, there is a long tail of more than a billion people who will be upgrading. This will take years to happen. We are really using and getting benefits from that.

VB: Maybe Apple’s disadvantage is that its iPhone is tied to the desktop. Do you think a lot of future products that are not tied to desktops will be more successful?

AV: Tying a phone to the desktop is a problem. But working together with a desktop is quite important. The computer supplements the phone’s capability. The phone is more important because it is with me all of the time. I’m represented by the device into the network. I access everything I have through it. At the same time, I want a tool to manage a more complex environment. That’s the role the PC plays. There is a false thought that the master is the PC and the phone is the slave. The roles are vice versa. The master is the device that is closest to me, and the slave is the one that is used to manage it.

VB: If you look at the pattern of purchases on the App Store, there are 25,467 paid apps, 7,485 free apps, with 7,469 games as the highest category, according to Mobclix. Half of the paid apps sell for 99 cents. Will the pattern be the same on the Ovi store?

AV: I’m pretty convinced that we will see different tiers of pricing for any apps and content. It is not any different from anything else. High quality costs money. Low quality doesn’t. You can have good services, expensive services, and fast services. The good services are usually expensive and fast. Low-quality services are cheap and slow. There are different ways of monetizing. Sometimes you pay. Sometimes it’s indirect. There will be a wide variety of rich applications. 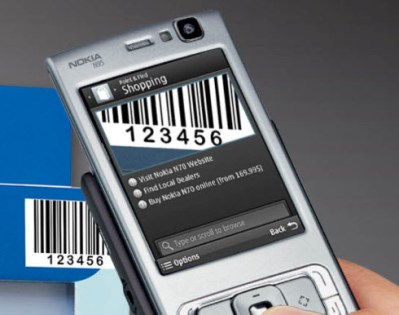 VB: The developers are going to have a far more competitive world?

AV: The more competitors, the more vigorous the market and the greater the opportunities for those who are really good.

VB: How much does Nokia have to pave the way with its own applications?

AV: Of course we are doing our own. But we are not day dreamers. We know that we are just the snow plow that lets everyone else come after us. That’s how we intend to behave. We offer genuine opportunities for third parties. We are very cognizant of our own limitations, and that is why we believe in openness.

VB: Do you think you have a flagship device that will beat the iPhone?

AV: I don’t know if you beat a device with a device. What you have is a piece of hardware. You need software. For the basic functionality, we are beating iPhone hands-down today with our N Series products. We have a big jump to take in usability to make it really user-friendly. If you compare an N95 (above, with a bar code identification app running) with the iPhone, we have a lot more features. Not all of them are easy for the normal consumer. You have to be a geek to make use of them. But we are taking quantum leaps to get better usability, and we will have many applications. We also don’t think the world is so simple that you just make one device for everybody. We know more about the consumers in the world than any other consumer goods company in the world because we have so many customers. We know they have different tastes and uses and so you have to offer a whole line.

VB: How is the N-Gage game line going?

AV: N-Gage and the N-Game Arena game network are our offerings in games. We have made two initiatives. The first was the hardware game device. The second was the software client that can play games on many devices with the arena. There is a very loyal following for the games, but things like the Ovi store will really give a boost for games. 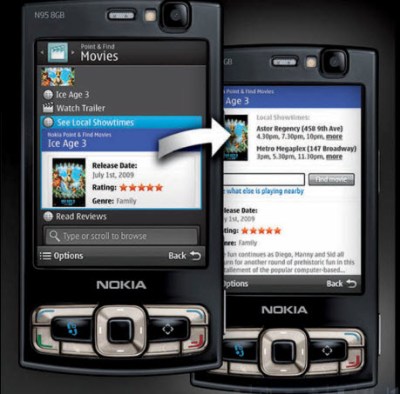 VB: How soon will some of your research ideas make it to market?

AV: This week we have launched the beta test in the U.S. and the U.K. for the point-and-find application (right), where you point your camera phone at something and the phone tells you what it is. It’s really cool, and it’s just the beginning. That’s the platform for many different things. You can tag things with contextual information, put it in the database, and you can use that information in the future, or someone else can use it. This is a crowdsourcing application that we consider to be very important. It’s coming very fast.

VB: You showed a video of a future phone that can change its shape through futuristic nanomaterials. How soon will that come?

AV: Nanotechnology is something that will extend itself to our industry and change the way we make mobile computers. One thing it could affect is the display, which could be bent or folded and extended when you need it. Nanotechnology is looking very promising. If you look at my display here, you see grease from your fingers. Nanotechnology could make that grease disappear so that you always have a crystal-clear display.