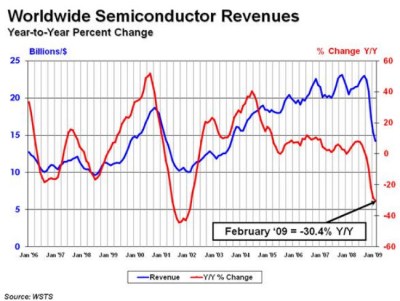 The chip industry, long a bellwether for the rest of the technology economy because chips are used in almost every device, is in a bigger funk than ever.

Sales in February fell 30.4 percent to $14.2 billion from $20.3 billion a year ago, the Semiconductor Industry Association reported this morning.

Sales were also down 7.6 percent from $15.3 billion in January, which itself was down 28 percent from a year earlier.

SIA President George Scalise said the chip industry is going through one of its steepest corrections in history. It is premature to claim that sales have hit a bottom, but Scalise said there are signs that the rate of decline has lessened from the fourth quarter of 2008. The industry has cut production and reduced inventory since late 2008.

Among the positive signs: the two largest contract chip manufacturers have said their factory utilization rates have improved, although they’re still at levels below those of a year ago. Demand is likely to continue to be below 2008 levels for at least a few quarters, with a gradual recovery to follow, Scalise said.

Compared to a year ago, sales were down steepest in Europe, which had a 36 percent drop. Japan and Asia Pacific were down 30 percent each, while the Americas were down 24 percent.