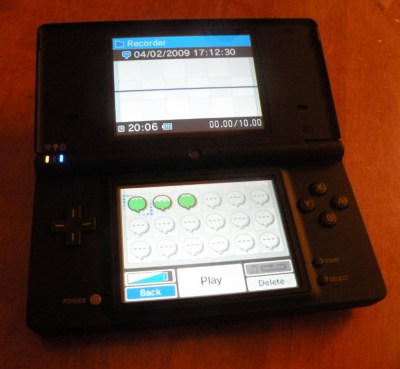 The Nintendo DS has sold more than 100 million units, more than twice the amount of its rival, Sony PlayStation Portable. The Nintendo DSi debuting this week in the U.S. will likely further cement the Japanese company’s hold on the handheld gaming market because it makes portable gaming more social and personal. The DSi launches on April 5, with lots of midnight store openings across the country.

As game designer Will Wright noted, the Nintendo Wii succeeded in making games much more social and non-immersive. Rather than staring at the screen in a solitary experience, you laugh because of the crazy things your friends do while they’re wielding the motion-sensing Wii controller. Likewise, the DSi provides social entertainment that you want to share with friends. 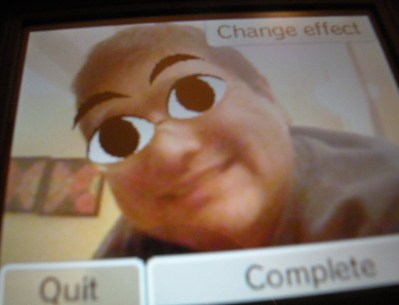 As you can tell from some of these pictures, though, the fun of the DSi is more like the fun you get from a gag gift. In that sense, it’s more targeted at kids and isn’t as broadly appealing to adults as an iPhone or iPod Touch. I would refer to this more as family fun, not self expression. There will be no end to the silly things my kids will do with a picture of me.

You can show off the new camera and sound applications on the device, much like friends do with iPhone apps.

The DSi is the third version since the DS originally launched in 2004. It is thinner than the DS Lite, which launched in 2006. Little LED lights on the left tell you if you’re connected to Wi-Fi, the charger is connected, or the power is on. It has two 0.3 megapixel cameras and better sound. The resolution of these photos isn’t high definition, but it’s good enough for joke photos. You can now store up to eight gigabytes of data on an SD memory card. That’s enough for hundreds of photos or sound clips. 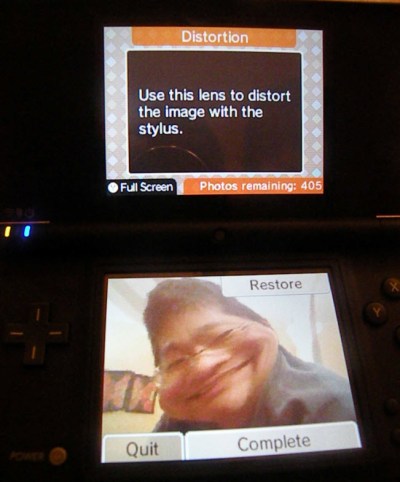 When you take a picture of yourself, you can look at that photo through 10 lenses or filters. You can distort the picture, giving yourself a big nose. Or you can remove the color from the photo. You can scribble a name on a picture or write a message in a speech bubble and share it with someone. With one press of the Mischief icon, you can overlay cartoon glasses or a mouth with ruby-red lipstick on your image.

You can make your face sad, angry, or happy. You can also merge two faces into one so that you can see what a couple’s future baby might look like. With that photo, you can increase the percentage “DNA” from one person so that the baby looks much more like one person than another.

With the DSi sound application, you can record your voice in 10-second sound clips and mess with the playback. You can speed it up, slow it down, or make it sound like a duck. You could take a song and add your sound effects to it. The sound files use the N4A or AAC file formats, the latter being the same that Apple uses with iTunes.

You can go right into the DSi shop to download games dubbed DSiWare, as long as you’re connected to a Wi-Fi wireless broadband network. The wireless data transfer rate is faster than the older models. You can buy Nintendo point cards at retail and enter the codes to give yourself the currency to buy things.

There is a new DSi browser, based on the Opera browser, for cruising the Internet. Pages load smoother and faster. Despite all of these functions, you don’t really need a manual to learn how to work the device. That’s classic Nintendo, always paying attention to making its devices accessible to the mass market. 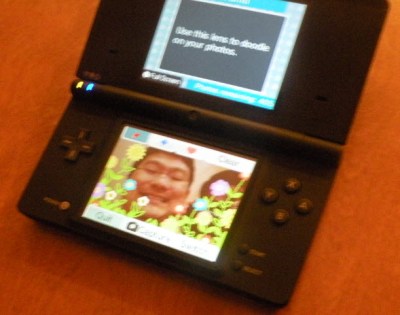 The proof of the pudding for this new DSi will be in the games. Nintendo announced today that the Nintendo-made titles available at launch include WarioWare: Snapped!, which uses the DSi camera to put a player in the midst of fast-paced action games; Bird & Beans, where players use an elastic tongue to catch falling beans; Brain Age Express: Math, with a whole new batch of brain-training exercises; Master of Illusion Express: Funny Face, where you can draw a face on the touch screen and see the face come to life; and Art Style: AQUIA, where you match a series of colored blocks to help a scuba diver reach the ocean floor.

Those who buy a DSi and connect to the shop before early October can receive 1,000 DSi points free to purchase games. About 2,000 DSi points can be purchased on a Nintendo Points Card for $19.99. Various DSiWare games will be free or sell for 200, 500 or 800-plus points. The DSi also has parental controls to let adults manage what kids can access with the device. The device comes in blue or black and will sell for $169.99.

It’s too bad Nintendo didn’t make the screen bigger. The DSi will surely be popular among DS fans, who are likely to upgrade. But it will be interesting to watch whether the iPhone or the DSi take the crown as the coolest portable gaming device.