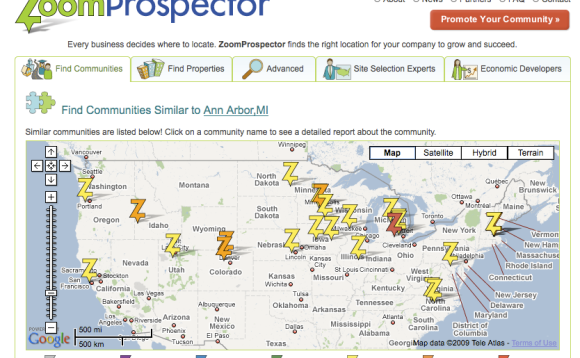 A lot of startups have to start small and focus their businesses on specific areas rather than do a national or worldwide roll out. But if that startup is having localized success in one region, how does it choose where to expand to next? The online business location service ZoomProspector has a new tool that should help with that decision.

The feature, called “Find Similar Communities,” lets you input a city, rate the importance of a series of factors such as population, white/blue collar workers, household income and various others, and then outputs a list of other cities that match the criteria. To test it out, I entered some factors I like about Ann Arbor, Michigan, and the result I got, with a 93 (out of 100) match, was Boulder, Colorado. That makes sense. Both are home to large state colleges and likely share similar characteristics as a result.

This is a tool that ZoomProspector has been using internally for a while now to give data to various large business publications that want to rank cities based on certain characteristics. It has worked so well for those publications that the company decided to open it up to the public for anyone to use. The comparisons are certainly interesting on a number of levels — perhaps you’re interested in moving and want to find a similar city to the one you’re currently in but in a different climate. But ZoomProspector is first and foremost a tool to help businesses decide where to locate.

ZoomProspector launched in October of last year as an offshoot of San Francisco-based GIS Planning Inc., which has been developing geographic analysis technology since 1997.