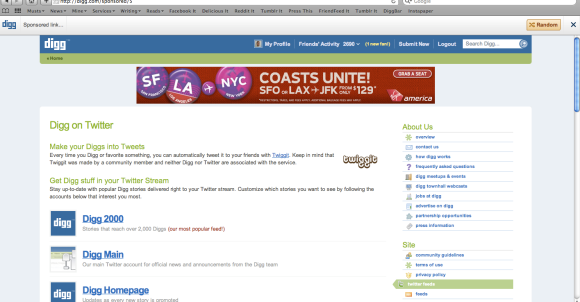 In reviewing Digg’s new DiggBar yesterday, I noted that it did feature advertising if you activated certain drop-downs such as a list of other stories from the same source. That seems like an okay way to make some money, but ultimately, Digg users probably aren’t going to be clicking on those ads too often. But I just stumbled upon another monetization model for the DiggBar: sponsored links.

If you click on the DiggBar’s “Random” button a few times, you’ll eventually be taken not to a dugg story but to a site labeled “Sponsored link…” in the DiggBar. This is a site you can’t digg or do anything else to because all the options are taken away (see screenshot). Instead, you can only hit “Random” again to move on from the page.

Depending on how often people use the Random button — I suspect quite a bit, like StumbleUpon, it’s fairly addictive — I’m sure Digg will be selling these sponsored links at a premium. Right now, I only see self-promoting Digg sites as sponsored links, but I’m sure that will change soon.

Speaking of StumbleUpon, it uses a similar approach to sell advertising, mixing in links that pay to get into the action alongside regular ones. Digg’s method seems to make the paid links much more obvious though.

I have a query into Digg about these sponsored links and will update if I hear back. Mostly, I want to know if these will only show up when using the Random button, or if Digg plans to use them as pages that show up intermittently when you, say, click on a link from Digg (I would guess that won’t be the case because that would be very annoying)? I also wonder if Digg is selling these links itself or if Microsoft, which handles Digg’s other advertising efforts, is in charge of this?

Update: Digg seemed a bit surprised when I brought this up, as apparently, they were testing these sponsored links internally. But here’s an official statement on the feature from Mike Maser, Digg’s chief revenue and strategy officer:

“We’re currently doing some testing around different sponsor options for Diggbar. At this point we’re just promoting internal and community features, but it could prove to be a natural extension for Digg’s ad products.  As always, we’ll look at user experience and advertiser demand to inform our direction.  We haven’t worked out all of the details but are continuing to test and gather feedback so stay tuned.”

Update 2: As commenter Doug Berger notes below, there are 8 of these sponsored sites right now being tested. You can get to them simply by altering the URL with a different number. All but one of them is a Digg or Digg-related site, but one is for a third-party Digg app.