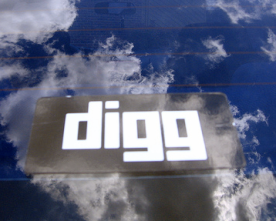 When it comes to web 2.0 startups, the social news site Digg is like an old man. Launched in 2004, it quickly exploded on to the scene and became both a web and media darling in relatively short order. So now it seems like it has been around forever, and for at least the past year or so, has been pretty quiet when it comes to product buzz. Instead, the biggest news about the company has been wide-ranging rumors about unsuccessful attempts to sell itself to companies like Google.

But it’s easy to forget that Digg is still a young company, run mostly by young people. And now, with a series of product launches, Digg looks to be fighting its way back into the spotlight on its own two feet. It is pursuing a grand vision in which it becomes a mainstream way for people discover and share news and other information anywhere on the web. Its efforts, in one way or another, tie into the company’s goal to target advertising better and so become not acquisition bait but a profitable stand-alone business. That’s why Digg raised a large round of nearly $30 million back in September.

The first move began several months ago. The Digg Recommendation Engine gave users a way to more easily find content beyond the site’s all-important home page. Using algorithms tailored to individual users based upon their past digging activities and those of similar users, the engine can now serve up stories that you might like but may not have found otherwise. From the get go it has worked pretty well, and it’s a system that improves with use of the site.

When it’s ready to come out of beta testing, look for recommendations to play a part not only on Digg’s home site but on other sites around the web, as Digg chief executive Jay Adelson tells us. More on that in a minute.

The next important move was done much more recently. Last week, Digg unveiled the DiggBar, the first tool that allows you to digg stories without having to actually visit Digg.com. It does this by placing a toolbar overlay on top of any site that you add “digg.com/” before the URL (or use the service’s bookmarklet). Perhaps more importantly, the DiggBar acts as a URL shortener which easily allows users to share content across the web using sites like Twitter and Facebook with one click.

Because the DiggBar shortens URLs to reside under the digg.com domain, there has been some controversy as to what exactly this means from a content publisher perspective. Danny Sullivan of Search Engine Land wrote an in-depth piece proclaiming the DiggBar to be a bad method for sharing content. He notes that because it frames your content in the Digg wrapper (and uses a 200 redirect code rather than a 301), Digg’s domain — not your’s — gets all of the link-juice that is so important to search engine optimization (SEO).

But Digg struck back yesterday with a post about why the fears of SEO manipulation are overstated. The post, by Digg’s vice president of engineering John Quinn, says that Digg reached out to Google and SEO experts when developing the DiggBar to make sure that it wouldn’t screw the content publishers who are, after all, the lifeblood of Digg. He notes that the company took “several steps” to make sure that the leading search engines recognize the main source of content as the original source, rather than the DiggBar version. He also notes that the company tweaked a few things further this week after listening to some feedback.

Clearly, Digg wants to do what it can to put people’s minds at ease about using the DiggBar — but it’s not exactly working. The company sees DiggBar as a central part to sharing content on the web. But the feature also offers a huge potential boost for Digg in terms of both pageviews and visibility. Already, the company has seen a 20 percent lift in unique visitors since the launch, Quinn says.

A third move in the Digg Renaissance came yesterday with the relaunch of its search functionality. Or perhaps we should just say launch of its search functionality, since its previous version, which has been in play for several years, was a joke. And Digg is quick to admit that in a post by Digg’s creative director Daniel Burka entitled “Digg Search: Now With 99.87% Less Suck.”

But the new search is interesting, and useful. It features advanced sorting capabilities to help users find exactly what they’re looking for, or to direct them towards good content based on the query they submitted. And it works like a regular search engine now, meaning you can filter out certain terms and use short-cuts to find only stories that have been promoted to the homepage, for example.

As people are starting to learn with Twitter, search is an important tool beyond simply using one of the major search engines. And perhaps mostly importantly for startups like Digg, it is one of the few outlets that provides a fairly solid form of monetization. As you can see with the new Digg Search, the company is trying to take advantage of that already by including sponsored links front and center right under the search query bar. 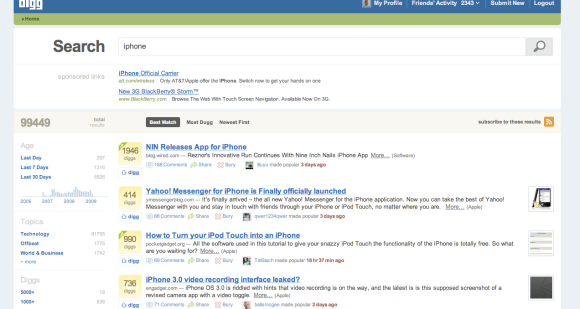 Tying the pieces together

The recommendations effort will help shape the value of Digg to other web sites, as the company continues to give third parties access to its data. It already lets third parties access information like the text of comments left by Digg users on a story (more on that here). In the future, look for Digg to provide more granular ways of driving traffic back and forth between itself and other sites. Once it figures out the sorts of sites that certain sub-groups of commenters like, it could let those sites add in only those comments — or those commenters — as Adelson tells us. At the same time, Digg is trying to make it more worthwhile for publications to pay attention to it. The company is working on ways of automatically recognizing the name of an author of a story that has been dugg, making it so the person can go in to Digg and reply to comments with the official designation as the author.

The goal, Adelson says, is to make Digg about more than just hitting the front page and being seen by the most people possible. Instead, he wants Digg to be the engine that drives collaborative news filtering going forward.

Along the same lines, look for Digg to try to make more sense of its data using other social web services. For example, the company is working on integration with Facebook Connect. With it, you’ll eventually be able to click on a Digg button in an article on another site and — if you’re already logged into Facebook — you wouldn’t have to register for Digg in order for your vote to count on Digg. As we noted above, Digg already has integrated its DiggBar with Facebook so you can share articles with the Digg URL with your friends Facebook. But this creates some strange interfaces, like multiple toolbars appearing on the screen for only Digg but also Facebook and other services, all stacked on top of each other. One has to wonder if there are internal politics going on between Digg and Facebook about who gets access to whose data — an issue that we’ve mentioned before.

In any case, all of these efforts — recommendations, the DiggBar, search, Digg data on other sites — come back to Digg’s revenue plans. It wants to serve ads that matter to you, and it is working on targeting those ads in relation to the topics you care about and the people you share with the most on the site. If that sounds familiar, it’s because Facebook and other sites are trying to do the same thing.