True Knowledge, which uses natural language processing to understand and answer complex factual questions, is one of the coolest websites I’ve seen in a while. The answer engine is still locked up in a private beta test, but now third-party developers can add the service to their websites and applications.

Perhaps the best way to illustrate True Knowledge’s potential is with a couple of sample queries — about me, of course. When founder and chief executive William Tunstall-Pedoe demonstrated the system, he created an “Anthony Ha” object and filled in some basic information, so now it’s possible to ask questions like, “Is Anthony Ha older than Britney Spears?” (no) and “Does Anthony Ha live in the United States?” (yes).

These aren’t questions you could ask of, say, Google since there’s no web page that spells out the answers. Those answers aren’t stored explicitly in True Knowledge’s database, either, but the system is able to translate my question into natural language units that it can understand, and then to calculate the answer from its existing knowledge. Thus, it knows my birth date, Britney Spears’ birth date, and that my birth date comes after hers. It also knows that I live in San Francisco, and that San Francisco is is in the United States, so it knows I live in the United States. (This kind of inference is also illustrated in the diagram below.) 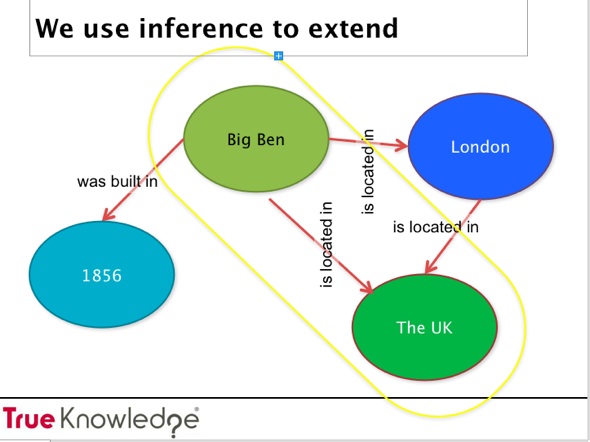 This sounds similar to what’s promised by the Wolfram Alpha project, but Tunstall-Pedoe says True Knowledge’s advantages include language independence and including the full ontology (i.e., relationships) around each object. Plus, while Wolfram Alpha remains highly secretive, thousands of beta testers have had a chance to play with True Knowledge — not only am I impressed, but so was then-VentureBeat writer Chris Morrison when he tried it out last year and declared it “Cooler than Cuil,” referring to the purported Google-killing search engine. (Chris’ article also has a more detailed breakdown of how True Knowledge compares to some of the other semantic search companies out there.)

The Cambridge, UK company says it builds its database algorithmically with information from Wikipedia, and also from an input system that allows users to not only enter facts but also agree or disagree with those entered by others, thus making it more likely that True Knowledge will provide the right answer. The company says it now has 4.5 million objects (such as “Anthony Ha” or “January 6, 1983”), which have been assembled into 130 million facts (basically relationships between the objects, such as “Anthony Ha was born on January 6, 1983.”)

As for the business plan, the Tunstall-Pedoe says he wants to partner with other companies so they can offer True Knowledge’s answer services. Releasing two application programming interfaces (APIs) is a step in that direction. It will allow developers to start adding the service to their own products for free. There’s a Direct Answer API, which provides a single answer to each question, and a Query API, which accesses the knowledge database directly.

The company has raised $5.4 million in venture funding. It won’t say when the site is opening to the public, but since it’s releasing APIs, that time probably isn’t be too far off. 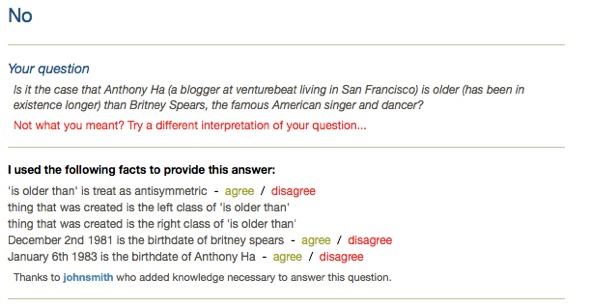