Intel, a bellwether for the bleak first quarter earnings season and the whole tech industry, may have just thrown a life jacket to sinking tech stocks.

The world’s biggest chip maker reported that its first-quarter net income fell 55 percent from the first quarter a year ago. But the net income of $647 million, or 11 cents a share, wasn’t nearly as bad as analysts had feared.

Paul Otellini, chief executive of the company, said in a statement that the PC industry found its bottom in the first quarter and that the industry is “returning to normal seasonal industry patterns.”

For its own internal planning, Intel is counting on revenues being flat in the second quarter that ends June 30. Intel had few other changes to its plans and financial outlook.

That should be a relief to those who feared more economic catastrophe. Revenue for the quarter was $7.1 billion, better than the $6.97 billion analysts expected but down 26 percent from $9.6 billion a year ago when Intel posted net income of $1.6 billion, or 25 cents a share. 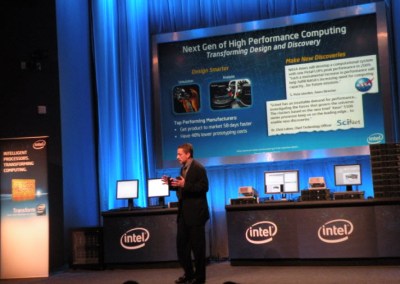 This quarter, the Santa Clara, Calif.-based company is the first to report earnings for the first quarter, which was likely one of the worst in history. Everyone is looking for signs of whether there’s more misery in store or some light at the end of the tunnel.

At the tail end of the first quarter, Intel fired off a major volley with the launch of its Xeon Series 5500 microprocessors for servers in corporate data centers. (pictured right)

Intel has taken a pounding in the stock market. Its 52-week peak was $25.29 a share. But its market capitalization of about $89 billion still dwarfs the $2.3 billion for rival Advanced Micro Devices. Intel plans to spend about $5.4 billion on research and development in 2009.

Intel’s gross profit margin was 45 percent, down from 53 percent in the fourth quarter because its factories were under-used. Inventories fell by $700 million in the quarter. That’s a good sign, since it means product is actually moving through the supply chain. Intel had a rare net loss of $18 million for its equity investments. But that was lower than the $130 million loss it expected, due to a better debt market picture at the end of the quarter.

Head count was 82,500, down from 83,900 in the fourth quarter. The company closed the quarter with $10.3 billion in cash and cash investments. An interesting tidbit is that sales of Intel’s Atom processor, which is used for the hot category of low-cost and low-power netbooks, were down 26 percent to $217 million sequentially.