Backblaze, perhaps the easiest tool available for backing up your hard drive, is moving the Mac version of its service out of beta testing today, making it accessible to anyone with a Mac.

The product’s appeal is simple: You install Backblaze and it handles the rest of your backup processes. You don’t have to select any folders, you don’t have to connect any devices, and you don’t have to remember to run a program every day or every week. As long as your computer is connected to the internet, Backblaze will be backing up your hard drive. At the same time, you have the ability to adjust its settings to, say, skip files of a certain size, or speed up the process by allowing it to send more data over your network.

I started using Backblaze after we offered invites to the Palo Alto, Calif. company’s Mac beta test back in December, and it’s gradually won me over. Sure, I loved the simplicity, but I was also discouraged when the program told me it would take several weeks to back up my entire hard drive. Not only is that a long time, it also outlasts the company’s 15-day free trial. Still, once everything’s backed up it works much more quickly, since it only needs to copy more data when files are added or changed. Co-founder and chief executive Gleb Budman says the company has also improved its notification system, so that even during that initial, seemingly interminable backup, you can view and access the files that have already been uploaded.

Backblaze is also adding a new feature today: The ability to manage the program across multiple external hard drives. Users could already back those drives up, but there wasn’t much transparency to the process. Now you can see which hard drive is being backed up when, and also customize which hard drives are included in the process. This feature will be included in both the Windows and Mac versions, but it’s particularly important for Backblaze’s Mac users, Budman says, because they tend to have more external hard drives — not coincidentally, they also tend to store much more data than their Windows counterparts. 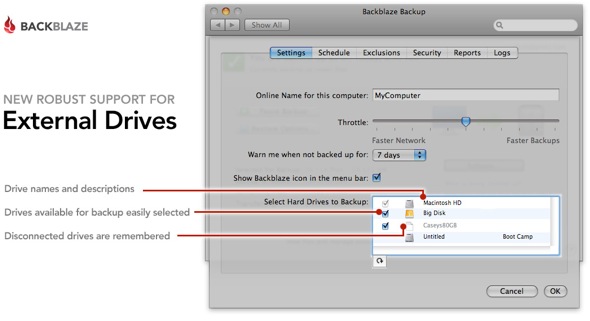 “I’m not sure if that’s because people tend to be more designer types and artistic types and things of that sort, or if it’s because the tools enable you to do those things more easily … but on the Mac side, we’re seeing a lot more storage on  a per-user basis,” he says.

The service costs $5 a month, after the 15-day free trial. Budman says that 25 of the new users who sign up today will get free Backblaze service for a year.