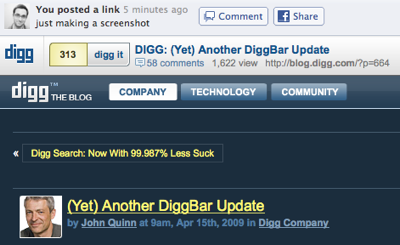 Facing ongoing criticism from web publishers about its new toolbar, the DiggBar, social news site Digg has another company blog post up today describing how it’s turning the toolbar into a win for users and publishers and not just for the company itself.

The toolbar, which you can access by adding “digg.com/” before a URL on a web page, lets you submit new stories to the social news site, or vote and comment on submitted stories (or see Digg’s ads), as well as shorten the URL (like this: http://digg.com/d1onmM). Some have been critical of the DiggBar — and not only for the garish aesthetic that results from the DiggBar appearing above or below other toolbars, such as Facebook’s (my personal pet peeve).

The big issue has been traffic, specifically the search engine traffic that Digg appeared to be redirecting from publications’ domains to its own through the URL shortener. Digg contended last week that it has already been looking out for publishers’ best interests here, so it’s significant that the company is taking more steps to do so today. From the company blog:

All anonymous users, on or off Digg will be taken directly to the publishers content via a permanent redirect (301), no toolbar, straight to the site. Logged in users that have not opted out will continue to see the DiggBar (200). These changes ensure that content providers receive full search engine ‘juice’ or credit for all links on and off Digg. They also ensure that Digg short URLs won’t appear in the indexes of any major search engines.

Digg also says its making it easier for existing users to opt out of the toolbar, and otherwise won’t show you the DiggBar unless you log in. The changes are happening next week. Except more changes in the future, including more integrated browser extensions – part of the company’s larger plan to be in the middle of information-sharing on the web.

The test will be if the DiggBar can prove itself worthwhile to publishers — and maybe that’s happening. Around 45 percent of all Digg activity is happening through the toolbar, the company also says today, and more than 25 percent of people who use the toolbar are discovering new content through the toolbar’s related article recommendation feature. Digg also says that it has seen a 10 percent increase in users sharing Digg-shortened URLs on Facebook, Twitter, email and other venues. (So that’s more users seeing the lame double-if-not-triple toolbar above the article they’re trying to read.)

So, as a blogger, I’d be alright with more users sharing my articles through Digg to Facebook and other sites with their own toolbars if it means getting more people to read my articles. Nevermind the double or triple-stacks, as long as toolbar recommendation service actually works.