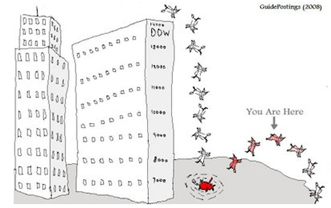 The stock market fell sharply Monday, as investors sold shares to lock into profits after a significant 24 percent recovery in the Dow Jones since March. The major indexes slid more than 2.5 percent, including the Dow Jones industrial average, which fell 200 points.

Reading the stock market’s direction is a necessity here in Silicon Valley. As much as local entrepreneurs and venture capitalists hate to admit it, their decisions are very much affected by the outlook in the markets. During the first quarter, white-knuckled venture capitalists invested 61 percent less money into startups than they did the same quarter a year ago — with Silicon Valley companies getting hit as hard as any region — in part because investing more money in startups becomes very risky. It may take years for such companies to eventually go public or get sold for a profit. Investors in venture firms are pulling back, too, supporting 40 percent fewer firms during the first quarter than a year ago. Angel investors, meanwhile, have also pulled back. They’d rather invest in public companies that appear down-trodden in value (and thus poised to recover), than in private companies that have to fight through a slow market. Taken all together, there’s a lot of gear crunching: Fewer startups means fewer companies that have traditionally created jobs much faster than large ones.

You just don’t recover as quickly as you think, and so it goes for the rest of the economy.

Today’s stock market news shows investors fear the market has risen too quickly. They may be right. In fact, I was shaking my head this weekend, during a conversation with a banker friend during which he bemoaned that the stock market is already pricing in a solid earnings performance for 2010. The ratio of price to next year’s earnings last week was approaching $13-15, making for a fairly and fully priced stock market — with little room for extra upside, and lots of room for downside. So this morning’s drop makes sense. See chart below. The pricing for next year is still at $11.50 for the S&P and $15 for the Nasdaq.

In other words, the price you’re paying for a given amount of earnings is already high, but you’re not sure if the earnings are really going to turn out in line with what you expect.

We’ve become so accustomed to expecting growth, but I’m not sure we can expect that, given our record over the past decade. Investors are eager for positive news, but to assume companies will perform flawlessly is silly, especially at a time when so many questions remain about the amount of bad debt still in the econom and about the extent to which unemployment will slow recovery. Unemployment just hit 11 percent here in California, and more joblessness means people will be more reluctant to spend and juice economic growth. The last six weeks may in hindsight be a case of those “animal spirits,” where investors breathe a sigh of relief because of statements by banks and others that they are doing okay, and so this wasn’t the end of the world after all. Some investors started buying again.

But you have to ask whether the market’s climb over the past six weeks is just a dead-cat bounce: You throw a cat out of a window high enough, it will bounce off the ground, but will come down again.

Much of the excitement over the past few weeks have come from statements by financial giants, such as Citibank, saying they’re profitable. But there’s a good chance we haven’t seen a bottom yet, despite what everyone’s saying, from Intel to Cypress. Paul Krugman wrote a column over the weekend saying the economy needs a little more good news than what we’ve been getting. He argues things are actually still getting worse, and that some of the good news about the financial sector isn’t really that convincing — with a lot of it coming from the amount of money banks are setting aside to cover expected future losses on their loans. Many analysts are doubting the banks’ assumptions. V-shaped recoveries, where there’s a quick bounce back, only happen when there’s a lot of pent up demand, but we’re not seeing that yet.