Zuora, a startup that offers online software to help companies automate subscriptions and billing, is releasing version 2.0 of its lead product, Z-Billing, complete with what it says are 100 new features that improve power, automation, and ease-of-use.

The Redwood City, Calif. company has been growing quickly since launching Z-Billing in May 2008, and with the release of 2.0, Zuora is also announcing its 100th customer. It’s a big one, too — server giant Sun Microsystems. (Yes, the same Sun Microsystems that Oracle plans to acquire for $7.4 billion.) True, Sun has  been struggling to find direction, but that doesn’t change the fact that it’s a big catch for Zuora, and lends credence to the company’s claim that more and more businesses, even big businesses like Sun, will want to focus on their product, while letting a third party like Zuora build the backend system for subscription and billing.

As for Z-Billing 2.0, Zuora says the features break down to 33 that provide more “power” (i.e., more pricing options), 33 that provide more automation (i.e., mass updating tools and auto-synchronizing capabilities), and 33 that make Z-billing easier to use with a new interface. The final feature is a new taxation module, which handles the tax side of the subscription billing process, and integrates with taxation software from Vertex, Sabrix, and Avalara. That should help eliminate some of the headaches for companies that operate in multiple countries, and have to master the tax codes in each of them. 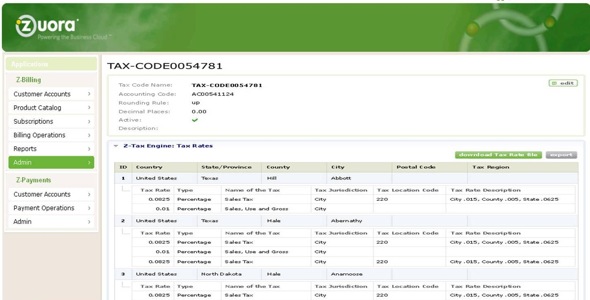