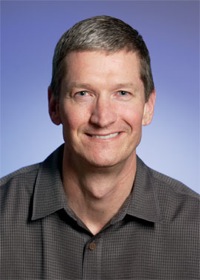 Apple‘s chief operating officer Tim Cook, who’s leading the company in Steve Jobs’ absence, took some sharp jabs at netbooks (computers that are smaller and cheaper than  laptops) this afternoon. His words might put a damper on rumors that Apple is developing a netbook, though more on that in a second.

“For us, it’s about doing great products,” Cook said during today’s call discussing Apple’s (surprisingly strong) second quarter earnings. “When I look at netbooks, I see cramped keyboards, terrible software, junky hardware, very small screens. It’s just not a good consumer experience and not something we would put the Mac brand on. It’s a segment we would not choose to play in.”

Of course, Apple has been making similar statements all along, but Cook’s words today were some of the most dismissive I’ve seen. He closed the netbook discussion with two final put-downs. He said Apple already offers devices that compete with netbooks, because if you want a small device for web browsing and email, that’s what iPhones and iPod Touches do; and as for the netbook, “I think it’s a stretch to call it a personal computer.”

So should this kill the netbook speculation? Well, it would certainly seem strange if Apple released anything even remotely resembling a traditional netbook at this point. On the other hand, the Wall Street Journal’s report, which sparked much of the recent debate, described “a portable device that is smaller than its current laptop computers but bigger than the iPhone or iPod Touch.” That doesn’t necessarily mean a standard netbook, so if you add up Cook’s comparison to iPhones and his statement, “We do look at this space,” the rumored tablet computer could still be a possibility.