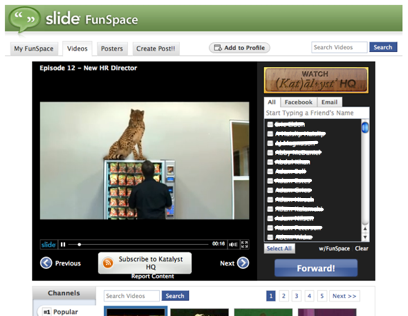 Videos haven’t been a prominent part of Facebook for most of its five year history — the tools for sharing videos haven’t been obvious, and people have already been busy using the site for things like sharing photos. But Facebook and outside companies have been working on some fruitful ways of improving video-sharing on the site.

Lately, application developer Slide, along with Ashton Kutcher-led digital content company Katalyst, have been experimenting with a way of making money from Facebook videos.

The two companies have been co-publishing a video series on Facebook titled “KatalystHQ,” a sort of meta look at life in Katalyst headquarters parodied other reality workplace shows. It just concluded its twelfth and last episode tonight, starring actor Gary Busey as the company’s human resources director. The sponsor, the curly fry Cheetos, ran ads before the video and placed its Cheetos-related product within the show.

Slide used its FunSpace application to distribute the video — for those familiar with Facebook application history, you may remember FunSpace as FunWall, which was a sort of Facebook wall in a Facebook design that has long since been outdated by subsequent redesigns. But the app has lived on and morphed into a more sophisticated multimedia sharing application. In its new incarnation, which prominently features videos, it has nearly eight million monthly active users. So it’s a useful distribution mechanism for shows like KatalystHQ. Any FunSpace user can see the video if they go to the FunSpace homepage or, more importantly, if they share it with their friends through the application. Slide makes it easy to do that by including the names of your Facebook friends next to the video (see screenshot).

The result: The previous eleven episodes have been played more than four million times, and viewers have shared with an average of 65 friends per episode.

Advertiser sponsorships for professionally produced online videos like this often cost in the low hundreds of thousands, somewhat less than the cost of buying an ad covering MySpace’s homepage for a day. The companies aren’t saying how much Cheetos paid them. But Slide and Katalyst are saying that they have “significantly extended” their relationship beyond this early experiment in made-for-social-network videos. Conceptually, this sort of advertising mingled with video content is similar to what digital video content companies like Next New Networks, Revision 3 and Deca are doing. Katalyst, a sort of testing ground for Kutcher’s celebrity-driven online experiments, has been trying out other forms of digital entertainment, including a web cartoon called “Blah Girls” and a new livestreaming deal with Ustream.

Facebook, more generally, introduced its own video-sharing application a couple years ago — the video-sharing button on the “publisher” box in its recent redesign have reportedly helped to increase uploads to nearly half a million videos per day. Meanwhile, it has released new ways for other companies to publish videos from their own services to its site, with Ustream rival Qik announcing integration with these features earlier this week.

Given the increasing popularity of video-sharing on Facebook, look for more sponsored and made-for-the-web professional videos that tap into sharing features on the site.