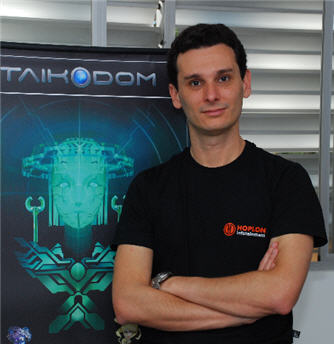 FLORIANOPOLIS, BRAZIL — Hot Brazilian startup Hoplon Infotainment is gearing up to go global late this year or early 2010 with Taikodom, the first multiplayer online video game developed in Brazil. Founder and CEO Tarquinio Teles (pictured) said that Hoplon will team with undisclosed global corporate partners and publishers to launch the online game and related products, including science-fiction books, graphic novels and perhaps a TV series in the U.S. and Europe, then Asia.

Little known outside Latin America now, Taikodom only has 15,000 players, mostly in Brazil. But Hoplon and its corporate partners project the number of players to rocket to half a million worldwide by the end of this year, with revenue growing 20-fold over the same period, according to Teles.

Taikodom has been described by some as a blend of Star Wars and Second Life in the 23rd century. Corporations rule the universe, and players use spaceships, weapons and virtual money to build alliances. Players can go to war with fierce enemies, or kick back and have a drink with friends in a space bar.

So far, Hoplon Infotainment and venture firm Idee Tecnologia of Sao Paulo, Brazil, have spent $10 million on Taikodom. Idee Tecnologia is the largest stockholder in Hoplon, while Teles and his cofounders hold majority control. Hoplon is running on a tight budget now, but the startup will be ready for a second round of funding later this year, according to Teles.

Given the sophistication of gamers in global markets, Hoplon is working closely with overseas partners to fine-tune language translations and other elements of Taikodom to appeal to “local tastes” and users. One element that won’t change: the game’s name. Taikodom was picked because it’s easy to pronounce and appeals to Eastern and Western cultures. 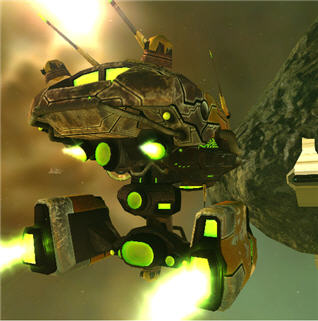 Hoplon has worked with IBM and its mainframe technology to bring Taikodom to life. At first, Teles’ colleages thought of mainframes as old technology “from the Stone Ages,” he said.  But they were won over by IBM’s System Z mainframe, which uses the same high-powered, parallel-processing chips as Sony PlayStation 3. The hardware has proven to be fast and flexible, giving players stable 24-hour access to Taikodom.  And as the game grows, IBM’s mainframe infrastructure and support staff can handle hundreds of thousands of new users, Teles said.  IBM’s “gameframe” and Hoplon’s connecting software, called Bitverse, use Java code and the Linux operating system. “The mainframe has been truly modernized,” Teles said.  (See IBM-sponsored video clip on Hoplon Infotainment and Taikodom.)

Hoplon’s use of mainframe technology is a wise move, according to Joe Clabby, head of technology research firm Clabby Analytics in Dubai and the author of Visualize This, an early book on the virtual Internet.  “Taikodom needs monster scalability if it is to support thousands or millions of users,” Clabby said in an e-mail interview. “Mainframes have tons more headroom for scaling than distributed systems, and they are easier to manage . . . You don’t need to invest heavily or have a very powerful computer to run this game.”

Clabby, who has consulted for IBM in the past and written about Hoplon Infotainment and his teenage son’s testing of Taikodo, added: “Tarq has recognized that virtual worlds are the next big thing — not only in gaming, but also in business. He has written a code base upon which business simulations can be deployed. As businesses move more heavily into virtualization, Hoplon will be perfectly positioned to serve them.”

Going global or succeeding like World of Warcraft won’t be easy, though. According to IEEE Spectrum, some in Brazil’s gaming community have called Taikodom vaporware, accusing Teles of hyping the game. It’s also unknown whether gamers outside of Portuguese-speaking Brazil will like Taikodom.

Teles admitted that Hoplon has made its share of technical mistakes in developing Taikodom.  That’s why his startup has grown slowly, improving the game step by step. But Taikodom’s not hype, he said.  In addition to working with IBM,Teles has been working with Silicon Valley-based Nvidia; Brazilian publisher Devir Editora; ABRAGAMES, the Brazilian Association of the Electronic Games Developers and several other major global partners, and his startup is ready to roll. “Taikodom is in the market now, and we’re already talking to foreign publishers about an international release,” Teles said. “I can’t think of a better way to show it’s not vaporware.”

Worldwide industry sales for all video games will rise to $68 billion in 2012 from $42 billion in 2007, according to PricewaterhouseCoopers, while DFC Intelligence projects that the global online game market will leap to $13 billion in 2011 from $3 billion in 2005.  Gamers who enjoy MMOGs, or massively multiplayer online games such as Taikodom, are expected to lead the way, spending more on subscriptions and game-related products than other gamers.  Brazil’s consumers especially love the Internet and video games. And bullish investors and entrepreneurs believe that Brazil’s consumer technology market will take off once the global downturn ends. (See a recent story on Brazil’s video-game industry in Veja, the country’s popular newsmagazine.)

Hoplon is based in the tropical resort town of Florianopolis, a one-hour flight south of Sao Paulo and Rio de Janeiro.  Florianopolis is best known for tourism and gorgeous beaches, but it’s also an emerging hotspot for tech startups, fueled by young developers and entrepreneurs from the nearby Federal University of Santa Catarina and other Brazilian engineering schools.  Hoplon employees run Taikodom from their offices in Alfa Technology Park, one of the largest incubators in Latin America with 40 companies, according to the Brazilian Association of Information Technology and Communication Companies.

In this entrepreneurial climate a decade ago, Teles and college friends Tiago Luz Pinto and Cristovao Buzzarello created the first rough business plan for Hoplon. But private investors were not enthused. “Their reaction was more or less the same: ‘Games? That’s kid’s stuff.’ They didn’t take us seriously,” Teles said. Teles and his cofounders jazzed up their game, adding 3D color graphics, and tried again a couple years later. Still no luck.

Their fortune turned in 2003, as the gaming market worldwide kept growing. Teles said that “the whole view on electronic gaming changed overnight” and Idee Tecnologia showed interest in funding Hoplon.  The Hoplon founders also hooked up with IBM Venture Capital Group and IBM Brazil executives at a technology seminar in Sao Paulo. Teles and his colleagues told IBM they wanted to grow their game into “a huge online universe from 5,000 to 50,000 players or more” using mainframe technology.  “IBM “immediately went gaga over the idea,” Teles said.

Teles said he’s “pretty confident” that game-players of all cultures will enjoy the challenges and  social interaction in Taikodom.  “People take their fun seriously,” he said, “and so do we.”

Edward Iwata, a Silicon Valley-based journalist, is writing a book on cross-cultural businesses and globalization for Jossey-Bass/Wiley and a new blog called www.CoolGlobalBiz.com.