Abengoa Solar has brought its massive PS20 solar tower in Seville, Spain online. The 20-megawatt plant is the largest of its kind in the world, delivering electricity to 10,000 homes. The development is yet another example of Spain’s growing influence in the solar sector — which now extends as far as the American southwest.

The tower architecture that defines the PS20 plant is still fairly unique. This particular plant is 541 feet tall (about 54 stories if you picture it as a building), and uses 1,255 mirrors to laser focus sunlight to boil water, create steam and turn a turbine. Abengoa already has a similar, 10-megawatt tower in operation, and another 20-megawatt tower in the works. All of these structures are part of the envisioned Solucar complex slated to produce 300 megawatts by 2013. One megawatt of energy is enough to power about 800 households — and that’s a conservative estimate. All told, Solucar would deliver electricity to 240,000 homes. 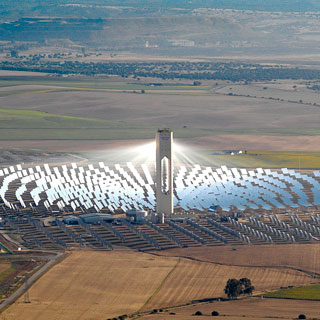 The PS20 plant brings Spain’s total solar capacity up to 3,000 megawatts, making it an even closer second to frontrunner Germany, the world’s leading solar producer (with a capacity of close to 4,000 megawatts). Spain has generous government subsidies to thank, though this dependence might cut the other way this year, as policy has capped new plants eligible for support at 500 megawatts. How many companies or projects this will effect is unclear, though probably very few.

The Spanish solar companies’ recent success isn’t limited to Spain, or even Europe. They have been making a real dent in North America as well, giving U.S. rivals a run for their money. Perhaps the most recent example is Arizona’s new 200-megawatt plant announced last week, to be built by Bilbao, Spain-based Albiasa solar. The project represents $1 billion for the company. But this is nothing new for the state, which already has a 250-megawatt Abengoa plant in the works as well.

The dearth of capital available to U.S. solar companies has also resulted in Spanish gains. Earlier this year, Spain-based solar giant Fotowatio purchased the full solar project portfolio of struggling MMA Renewable Ventures, including an existing 14-megawatt plant in Nevada. MMA is known for financing solar facility construction, retaining ownership and selling the electricity to large utilities. Its buyout will make Fotowatio one of the biggest solar developers in the U.S., even though it’s based in Spain. We’ve reported several times on American solar companies that have had to sacrifice plant-building ambitions in favor of panel sales in order to stay afloat. All the while, their Spanish competitors have been pretty well buffered against the global financial crisis.

But Spain isn’t the U.S.’s prime concern — it ranks a distant fourth in world photovoltaic production, trailing Japan as well. The good news is that the three leaders each sprinted ahead in turn when substantial government support kicked in. For Spain, that happened last year, for Germany the year before. Now, with president Obama placing more and more emphasis on renewable energy development — backed by generous cleantech stimulus funds — the stage is set for the U.S. to make its stand. Much will depend on how fast and efficiently companies put these dollars to work.