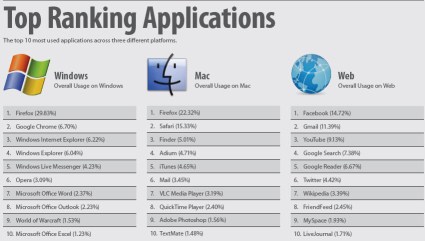 Surprise. People use Facebook all day long, whether they’re working or not.

That’s one of the findings of a survey by Wakoopa, a company that lets users find new software and applications online.

The interesting results include these facts: Peak usage for social networks is 9 pm to 10 pm, but Facebook usage happens consistently throughout the day. Across all web apps, the peak time is 4 pm to 5 pm.

The company’s users are clearly more tech-savvy than average and so the results are biased to show patterns of heavy computer users. Wakoopa tracks more than 75,000 of such users and the more than 200,000 applications they have installed. Pearson is also a sponsor of the report, which tracked usage in the first quarter. 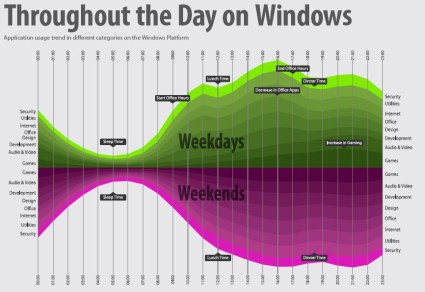 — Twitter continued its growth spike throughout the entire first quarter of 2009 with a heavy increase in March. Tweetdeck ranked first among users who posted updates to Twitter via desktop applications, with Twhirl a close second.

— The most popular new app on the Mac is Destroy Twitter.

— The most popular new apps on Windows are the games Burnout Paradise and Mirror’s Edge.

— Windows Live Hotmail and Symbaloo were the fastest gainers among web apps, while Google Friend Connect and Veoh showed the greatest decline.

— Google Chrome now commands 15 percent market share among browsers. The Opera browser has its highest adoption in Europe, while Firefox is the dominant browser of choice worldwide for Wakoopa users.

The survey by Wakoopa is the debut edition of its “State of Apps: Software, Games and Web” report.
Wakoopa users agreed to let the company track their application usage.