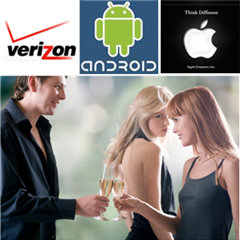 There’s been lots of speculation that Verizon, the largest U.S. phone network, is flirting with Apple, with the idea of introducing an iPhone on Verizon’s network next year.

Verizon is building out a new fourth-generation network, based on Long Term Evolution (LTE), which is why interest in this is high.

There are plenty of reasons why Verizon would court Apple, which has so far signed an exclusive deal with AT&T within the U.S. market. Foremost among them: Verizon wants to avoid AT&T having all the iPhone action for itself.

Completely overlooked in the Verizon-Apple dalliance reports, however, is evidence that a Verizon may already be striking up a romance with Google’s Android, one of iPhone’s main competitors. This is not to say that Verizon can’t have both.

To be sure, there hasn’t been any formal announcement yet about Verizon-Android, but there’s more circumstantial evidence that something is going on between Verizon and Android.

First, Verizon runs a wireless network based on CDMA, which is different from AT&T’s GSM technology. And we know that an unnamed CDMA carrier is getting code developed for a chip that would allow Android to be supported on CDMA. Teleca, a company that provides such software help, said this in a statement:

“Teleca is developing several strategic projects for its customers around Android. One major project we are undertaking is to extend the Android platform to support CDMA radio technology. This will enable handset manufacturers to build CDMA handsets based on Android and will open the Android handset market for CDMA Network Operators.”

Next, we know that the code has already been submitted to Google, and won approval.

But this job notice gives us a clue that Verizon is looking for Android expertise. Just saying.