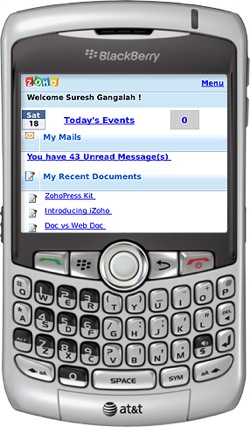 Zoho, a company that provides a wide range of free web applications for productivity and business, is making an aggressive move into the mobile arena with the launch of Zoho Mobile, a mobile site where users can access six Zoho apps on the major smartphone platforms: iPhone, Android, BlackBerry, Windows Mobile, and Symbian.

The move comes as Google has been rapidly improving the mobile experience for its competing applications, particularly on the iPhone and Android. For example, the new version of Gmail on the iPhone is fast and well-designed enough that I use it as often as the standard iPhone Mail app. Meanwhile, while Microsoft has been talking about adding mobile support for its Office products in the browser as well as releasing native apps for Windows Mobile, Quickoffice beat the software giant to the punch on the iPhone, with the launch of an app for viewing Office documents.

So Zoho certainly needs to be offering this kind of support. (It says it previously offered mobile support for the iPhone and to a limited extent for Windows Mobile.) What’s interesting, for now, is how Google, Microsoft, and Zoho are focused on making their applications work across mobile devices, allowing users to access them through their browsers as a mobile website, rather than offering a suite of standalone, native apps for say, the iPhone. Right now, Zoho Mail, Calendar, Writer, Sheet, Show, and Creator are available through the mobile site, with more to come.