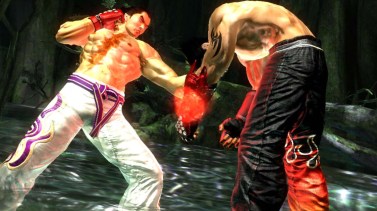 Japan’s Namco Bandai Games showed off its 2009 game line-up yesterday at a pre-E3 event in San Francisco where it was plain to see the company’s strategy.

In a lot of ways, the company’s plans are familiar: jump on the trends, milk the sequels, and throw a lot of weight behind the monster hits. It’ll be interesting to see if the strategy can make this company — formed in 2005 from the union of Japanese publishers Namco and Bandai and famous for brands like Pac-Man — into something more than a solid competitor in the game business.

One of the company’s strengths is that it has a lot of game franchises in its stable. Its monster game coming this year is the fighting game Tekken 6. Not many game franchises make it to the sixth version. Tekken has sold more than 33 million units — with an estimated retail sales value of at least $1.3 billion — in the past 14 years. The title will debut for the PlayStation 3 and Xbox 360. I would expect there’s no difference in the art between the platforms, since it pays to create the art once and spread it over more than one platform. No one is really doing unique stuff in a multi-platform game because of the costs involved. But it’s interesting that Namco Bandai added a PlayStation Portable version of the game.

Game critics like me can’t get excited about titles with a 6 after them. But who are we to criticize? Last year, Namco Bandai’s sword-fighting game, Soul Calibur 4, sold millions worldwide. Now a new version, Soul Calibur Broken Destiny, is headed for the PSP. Tekken 6 certainly looks good, but it’s a button masher, where you furiously punch at the buttons in order to make your fighter take out the other fighter on screen. And just about every big Japanese company has a button masher. 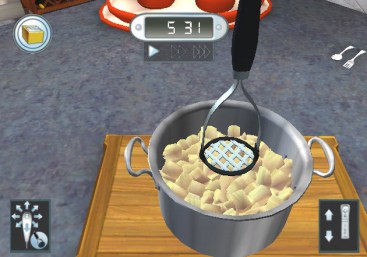 Namco Bandai is also jumping on the Wii bandwagon. It’s doing so in a smarter and more nimble way than some of its big rivals. But the tactics are familiar. Show a little bit of originality, then exploit the hits with derivatives. If last year was a time to launch some new hits, this year’s the time to create Wii derivatives.

An example is Food Network: Cook or Be Cooked. It’s a cooking game, much like the Cooking Mama titles that Majesco has popularized. Here you use the Wii controller to pretend you’re mashing potatoes. While Namco Bandai wasn’t first in this space, at least it was smart to team up with a major brand. 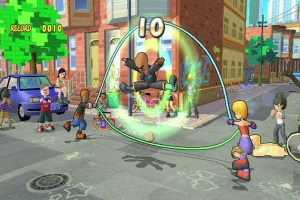 Namco Bandai also did well with some interesting exercise/dance-oriented titles for the Wii. Last year, it released Wii Ski, the first outside title to take advantage of Nintendo’s newly launched Wii Balance Board for the Wii Fit game. (You could stand on the balance board and steer your skis with your legs). Now it has Active Life Extreme Challenge, with cute cartoon-style characters performing all sorts of exercises. You actually get exercise yourself by waving around the motion-sensing Wii controller. This game will face off against titles such as Electronic Arts’ EA Active exercise title. The Namco Bandai game has more than 50 activities from rock climbing in the Grand Canyon to using a jump rope. 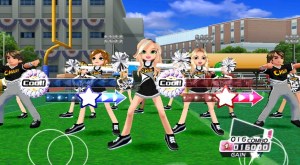 Another cutesy title is Wii Cheer 2, a sequel to a dance-oriented title launched last year that became the top-selling cheerleading game on the Wii. Yes, you can wave your arms in circles and make all sorts of cool moves in synch with the cartoonish cheerleaders on screen. 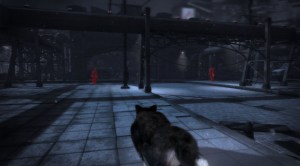 One of the coolest looking titles was Dead to Rights: Retribution, a noir-style game that lets you play a couple of different characters. One is a beefy vice cop, Jack Slate, who can take out enemies with all sorts of weapons and tactics. The other is a canine, Shadow, who can rip the necks out of enemies. It’s cool to play from the dog’s point of view, but this title is a sequel to an original game that was a good idea. 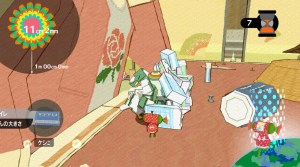 One title that was original when it came out was Katamari Damacy. You play a little prince who rolls a ball over things that stick to it. He gathers up huge balls, dubbed Katamaris, for the King of All Cosmos. It’s a goofy title that is addictive as you try to roll up the biggest Katamari under a time limit. The problem is that this game was original when it first came out in 2004. Now it’s coming out for the PlayStation 3 in the fall, with slightly prettier graphics and favorite levels that have been seen before in all of the previous four Katamari games. That’s sort of like taking a great idea and beating it to death. 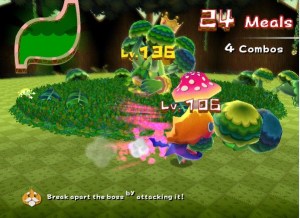 Katamari itself spawned a derivative “original” game from Namco Bandai: The Munchibles. In that game, you play a creature that gobbles up everything in sight and gets bigger and bigger. After completing a level, you can poop everything out. It’s kind of a cross of Katamari and Pac-Man. That title debuts on the Wii on May 26.

There are fresh ideas here. But there are many variations on the same old themes we’ve seen before. I may sound grumpy. Perhaps it means I’m getting ready for my eyes to glaze over as I see countless games readying for the E3 trade show coming up in June.