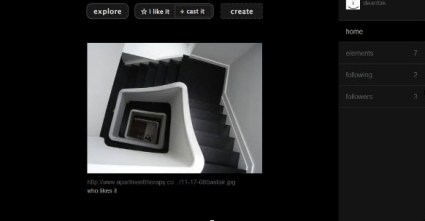 Lunarr made some innovative web applications, but it never took off as a business. The Portland, Ore.-based company has decided to shut its operations as of May 10.

The company came up with creative web applications such as Elements, which I saw as a kind of visual Twitter aimed at stoking the imagination. Elements launched in February and got a good crowd of beta users, but it wasn’t enough to justify further investments, said Hideshi Hamaguchi, the company’s co-founder.

The idea behind Elements was to let users share pictures that could inspire other people to be creative. It was minimalist in its nature, and the idea was for creators to use it to refresh their minds, if only for a few minutes a day. One of the problems was there was no obvious commercial hook for Elements, and after its launch, it snagged only 3,000 users.

The company’s other application, Themes, which basically lets you write notes to people on the back of web pages, hasn’t take off either. You flip a page around, write a note and then share it with people. It’s a cool kind of collaboration tool. To promote it, the company rented a billboard along Highway 101 in Silicon Valley and threw a big marketing budget into this single sign, with cryptic messages that encouraged people to flip over web pages. But only 7,000 users materialized as loyal users after a year.

Lunarr was built to take risks. Hamaguchi and Toru Takasuka co-founded the company. Both worked together at Panasonic. Takasuka left in 1997 to start Cybozu, which became a successful software company. Hamaguchi was running client strategy for a design lab, Ziba, for Panasonic in Portland, Ore., and did other functions for Panasonic after that. In 2005, they left to start Lunarr in Portland. The company grew to 11 employees.

Hamaguchi said earlier that the company was okay with a slow pace of growth. That’s because it was contemplating a trilogy of software applications, all aimed at helping artists collaborate better. But it looks like part three of the application suite isn’t going to materialize.