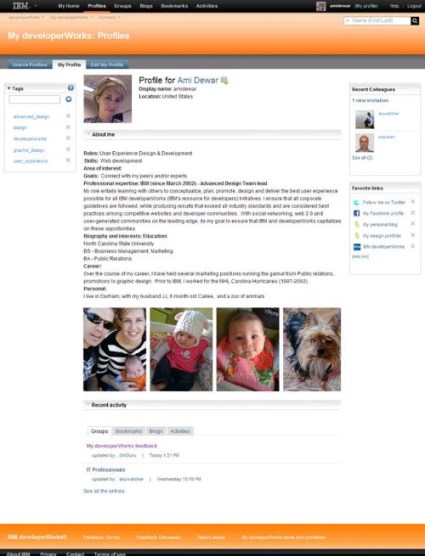 For 10 years, IBM has been using its software developer site as a watering hole for those who use IBM’s tools. Now the My developerWorks site is becoming a social network.

The company said that it is getting hip with the times. Its own surveys found that developers are using forums, blogs, wikis and online newsletter to talk to each other. Hence, IBM is adding social networking features like those its developers already use on Facebook, MySpace and Twitter.

It’s a milestone for social networks, just like it was a milestone for virtual worlds when IBM gave its blessing to Second Life and opened up its own community inside Linden Lab’s virtual world to train its new employees and talk to customers. The whole idea with the social networking is to accelerate innovation. Developers might work together, for instance, on how to build a smarter energy grid.

IBM’s version of social networking is a little tamer than MySpace and more akin to LinkedIn, where reputation matters. You can find experts in particular programming languages and talk to them directly or just watch what they do on the IBM site. That’s much the way you can “follow” someone on Twitter.

The developerWorks site has a library of 30,000 resources and an estimated eight million users. Now IBM is letting people leave comments on sections of the site that everyone else can see. But don’t expect to see job postings. (You can imagine how competitors would poach IBM employees with those). The site is now live. For some people, that means that communicating during work will become a lot like communicating for fun. Here’s a demo of the site.

The site is based on Lotus Connections. Over time, users will be able to access data on Facebook and other social networks and import it into their own apps on the IBM site.