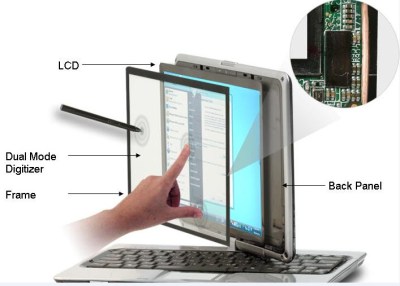 From the iPhone to Microsoft Surface, multi-touch displays are one of the most fashionable new user-interface technologies.

N-trig, an Israeli company, hopes to make displays even more versatile by allowing them to respond to input from both fingers and pens. Usually, it’s one or the other. Capacitive-touch screens work via small electrical fields that respond to human touch. They usually don’t work with a stylus or pen. And the screens that work with pens don’t work with fingers. N-trig has created the DuoSense multi-touch manipulation development system to allow both kinds of contact.

This week it launched a development system to enable software developers to take advantage of these screens.

Microsoft recently led a $24 million round of investment in N-trig, in part because this technology will help computer makers create machines that take advantage of the touch-screen technology built into the Windows 7 operating system. Computer makers such as Hewlett-Packard have launched multi-touch computers, but the technology is expected to become far more useful with Windows 7.

N-trig was founded in 1999 and has more than 100 employees. Besides Microsoft, investors included Aurum Ventures, Challenger Ltd., Canaan Partners, and Evergreen Venture Partners.