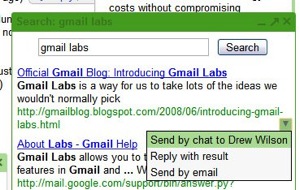 Google has been busy using its Labs area (for experimental features) to integrate a bunch of its applications into Gmail. My favorite so far is probably the Google Calendar widget, which reminds me of upcoming meetings as long as I’m logged into my email. But there’s been one tool missing, one that Google is kind of well-known for: Google Search itself.

Now, Google just announced that you can add a web search bar in Gmail Labs. Obviously, that means you can perform web searches in Gmail without opening a separate tab; the results appear in a small box at the bottom of your screen. You can also open a menu of actions that you perform with a search result, such as including the result in an email reply or sending the search to a friend via instant message.

It’s becoming more and more clear that Google is making Gmail (at least potentially) the central hub of all users’ activity. That certainly appeals to me, since my Gmail account is the one tab I always keep open in my browser. Of course, that also creates some problems, as Gmail becomes more and more crowded. With so much activity happening in one window, I’ve noticed that I’m starting to miss new messages or alerts, and also having to scroll up and down frequently to access different widgets.

In the case of Google Search, the company recommends moving the widget to the top of the screen for easy access, and also notes that you can access search through keyboard shortcuts. But that doesn’t address the bigger issue — as Google piles cool features into Gmail, its designers need to start thinking about how all of those tools fit together.